St John's has fabulous diving. Stunning coral plus large shoals of fish, turtles, dolphins and sharks. It's a collection of small reefs in the far south of Egypt covering around 290 km2. Fury Shoals, also with great diving, is 100 km north. 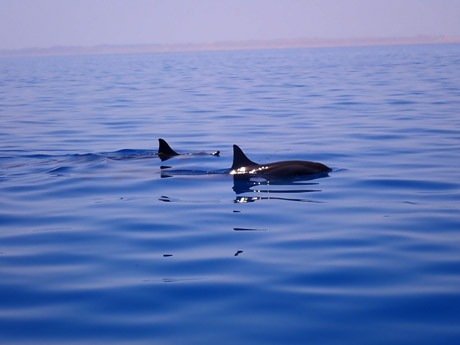 You can dive St John's and Fury Shoals throughout the year by taking a liveaboard departing, for example, from Port Ghalib which is 3 km from the Marsa Alam airport. The liveaboards will generally arrange an airport pick up from either Marsa Alam or Hurghada. You will need 30 or 40 dives to experience St John's. Take your log book, qualification cards and insurance documents with you. Any extras you buy on board - beer, 15l tanks, etc - you can pay for in US dollars, Euros, British or Egyptian pounds.

Forty-eight km offshore, St John's is 115 km from Hamata in the south of Egypt.

You can dive here year round but some of the best diving is in the summer months. This is the most likely time to see hammerhead sharks at St Johns. Spinner and bottlenose dolphins are frequent visitors.

You will not be disappointed in the dive sites of St John's. Great vis, beautiful reefs, caves and always the chance of seeing sharks or turtles.

A forest of coral pinnacles to swim around in the south-east corner of the reef. Turn the corner with the reef on your right and you find a wall. Here there are swim-throughs and caverns - very pretty. Look for delicate sea fans in the overhangs. Abounding with mountains of porites hard coral in pale olive and blue. A dive for everyone. 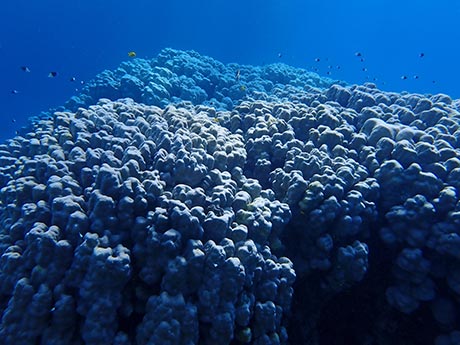 A small oval reef. You'll probably be dropped at one end to swim round one side of the reef back to the boat. It plateaus between 3 and 7 m from the surface and has fairly steep sided walls. 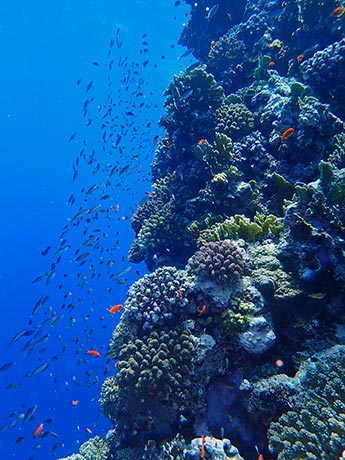 The dive comprises reef walls and plateaus. Lovely soft corals, shoals of fish and often a Hawksbill turtle. Kebir means big and this is one of the largets reefs in the St John's area at 250m long and 120m wide.. 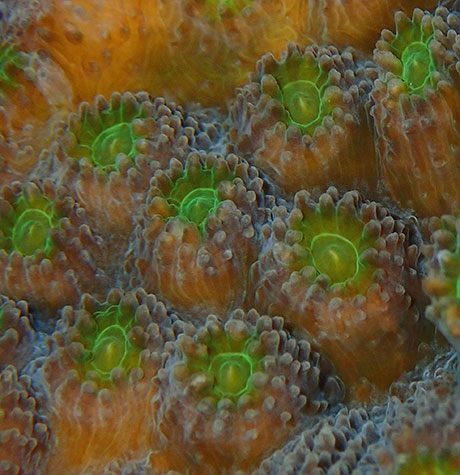 Also spelled Habilie Jafar. A beautiful pinnacle dive. The pinnacle reaches to within 5 or 6 metres from the surface and drops to over 60 m. At 40 m the drop-off steepens. Look down here and you might see white tip sharks.

You can circle around the pinnacle gradually rising to finish the dive at the reef top. An octopus lives on the top of the reef with pixie hawkfish sitting nearby waiting for crumbs from the octopus's table. Barracuda also lurk nearby.

The current is most often from the North 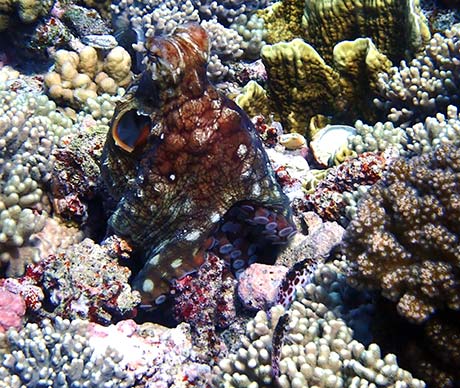 The name means small and with good air consumption this is another one you can swim completely around. But it is a lot of finning with any sort of current. A better plan is to go in at one side of this circular reef - the north if this is the direction from which the current is coming - and drift back to the south.

Look for a fan coral garden running between 20 and 6 m on the east side. The reef almost touches the surface and at its shallowest part in the south has crevices cutting in. 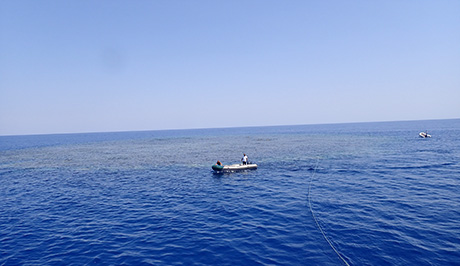 Dive in and out of swim-throughs and caves. Many juvenile fish with the bonus of a resident Napoleon Wrasse which likes to investigate divers. Octopus in holes. A good spot for night diving.

This is a really lovely dive. Loads of fish: blackfin dart fish, juvenile golden trevally trying to be a pilot fish, goat fish, parrotfish galore right up to tuna and eagle ray. And of course - lots of dophins on the surface. At the south eastern tip of Fury shoal. Best dived from a liveaboard but can be done by boat from Marsa Alam. This is a horseshoe-shaped reef enclosing several pinacles in a coral garden. The outer edge of the horseshoe is deep and the inner shallow. 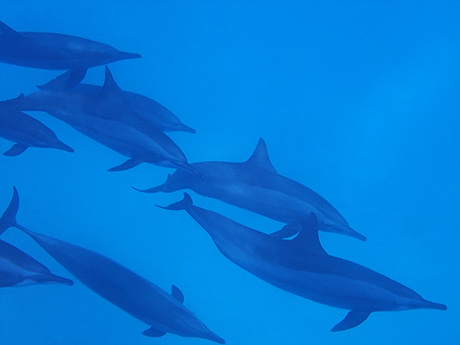 Malahi means playground, and it is like a playground for divers. Everywhere there are swim-throughs and coral pillars and outcrops to swim in and out of. This is made from a collapsed reef. Maximum depth 14 m. The north side has some especially nice formations of hard corals. Home to a grumpy turtle which as been known to bite people. Plenty of squirrelfish - Crown and Bloodspot (Neoniphon sammara) 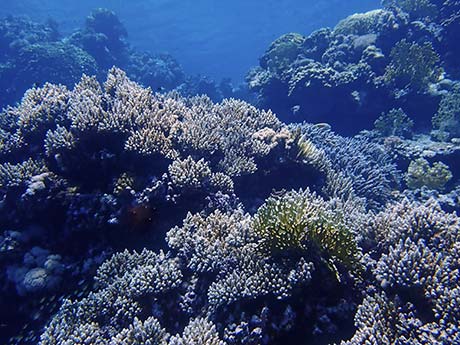 Another great dive. Cathedrals of corals in the west. Massive dome corals - Porites nodifera. Large giant morays. Admire the magnificent corals in the south then turn right into swim-throughs and caves. Interesting tall yellow sponges, nudibranchs and some beautiful Brain coral, Platygyra daedalea. Another good place for a night dive where the basket stars are out and moving around plus tiny shrimp, coral crabs, hermit crabs and other invertebrates.

The name of this dive translates to Father of the Small Pool. It is very pretty inside the "pool". Look out for the Red Sea Walkman near the wreck of a small yacht which sank 20 years ago. Chestnut blennies sit on top of the coral whist Seba's spider conch moves slowly across the sand leaving a distinctive trail.

Visits the Deep South and Elphinstone. An excellent crew and dive guides but the Emperor Divers booking office leaves something to be desired. 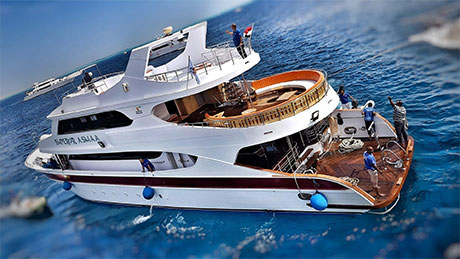 The boat provides facilities for tech diving. This liveaboard has 11 cabins that can accommodate 22 divers. Free cancellation up to 30 days prior the departure day 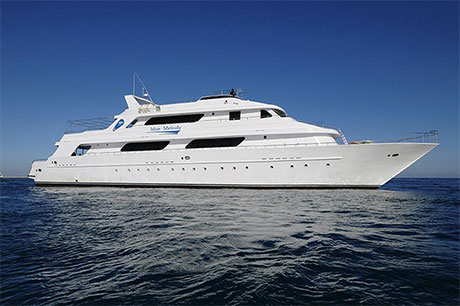 Further Reading to the Red Sea

Indian Ocean & Red Sea Fish Guide
by Helmut Debelius, KINDLE / ANDROID, 2013.
The fish sections of Helmut Debelius' Indian Ocean & Red Sea Reef Guides are now available as an app for Android / Kindle.Covers 650 species with more than 900 photos
The original hardback Red Sea Reef Guide is very good - with interesting observations about fish which years later scientists were claiming to have observed for the first time. For instance, a paper was published in 2011 describing how the authors had "discovered" that goatfish work together as a team to catch food. Debelius, though, had described this behaviour in the 2003 edition of his book (and possibly earlier - 2003 is the date of my copy). Buy

For those who prefer hard copies, we recommend.

Please add your comments. Do you want to recommend a dive operator? Let us know.