9 August 2021
Private resorts all along the northern coast offer the best access to the sea for shore diving. Some expatriates visiting Jeddah book a weekend diving package with a hotel in the city and nearly all Jeddah's hotels offer some kind of access to northern beaches by bus. The most popular are Al Nakeel Beach, Blue Beach, Sheraton Beach and the Al Bilad Beach. The top hotels in Jeddah have contacts with the dive shops and can arrange instruction for beginners and recreational dives for qualified divers. Many offer private beaches from which to shore dive.

You can also book space on one of the excursion boats that go out further to more colourful and secluded sections of the reef. You need to bring along a passport, Igama or Saudi ID and your Dive Permit.

"The padi, naui, bsac and any other dive card are now accepted no more need for Saudi dive card, if so we would be up the creek without a paddle when tourism starts again very soon."
Eric Mason, January 2019

A Saudi muslim female must have her legal escort (brother, husband etc).

"Dive Boats: Not much to do in Saudi so dive it is and the best way is to take a trip on a dive boat. There are many operators most of which cater for (generally) the locals. They have little else to do as well. I tend to use a new outfit called Bubble Divers which can be found on Facebook. Khaled the 'Captain' (all dive masters are called captains here) is a good bloke but his English is a little new. One thing you will get to realise that the boats are not the quiet boat trips you get elsewhere, they are noisy and quite cramped. The noise comes in the form of local music played at stupid levels which makes things uninteligiable. This generally doesn't last too long but can be quite annoying. The general price is 300sar per trip including air and food and drink. The food is good but sometimes you find you are sharing a boat with some local guys that find eating to be a hobby. They will devour all the food and drink within the first few hours leaving nothing for later. Greedy is not the word. The trip will usually last for 10 or 11 hours with a BBQ in the afternoon and the foods nice. Dont forget that you will need to take ID along as the captain will need to hand this in to the coast guard so you can officially leave. Its one of those stupid laws but you're not allowed to swim in the Red Sea if you're in KSA as you might want to leave the country, yeah just swim the 400 miles to Sudan..."
Glynne P, UK,20 September 2012

An effort to start dive tourism was made in 1990, by Saudi Airlines Station Manager for Germany, Harry Schiller. Saudia teamed up with the Al Bilad Hotel and the Al Saif, the first purpose built dive boat to operate in the kingdom - jointly owned by Dr Talal Bakr and Capt. Victor Organ - to provide dive packages. Brochures were printed but the Gulf War put the program on hold and it wasn't until early 1999 that Mr Schiller arrived with travel agents from across Europe for a familiarisation trip to Jeddah and Yanbu. The first dive group from Germany arrived in October that year at Durrant Al Arus and since then there have been other trips and tour groups.

International tourism later stopped for several years after the Kingdom withdrew tourist visas. In 2019, though, a new tourist visa became available for citizens of the United States, all European Countries, Australia, Japan, South Korea, South Africa, Brunei, Malaysia, Singapore, India, Pakistan and Taiwan. (Other countries may be added to the list - check your local KSA Embassy web site for details.) Visas can be applied for online, either before you arrive or at the airport. You may be refused entry to Saudi Arabia if your passport contains evidence of previous travel to Israel or indicates Israel as your birthplace.

Make sure you have adequate travel insurance. More advice on travelling to Saudi Arabia is on the British Government's Foreign travel advice page: Saudi Arabia and the Saudi web site.

There are numerous dive shops in Saudi Arabia.

"Dream Divers have closed their dive shops - the customers only wanted cheap cheap or spear guns and teaching became a joke. Someone will always do it cheaper. They now concentrate on Liveaboard depending on the time of Year in the Farasan Banks not to be confused with Farasan Islands, Rabiqh from Jeddah and Yanbu. It is wonderful diving Hammerheads, Tigers, Manta large turtle everything you could see in Jeddah 25 years ago, it is wonderful try it.
Dream Divers Jeddah they will organize your trip in partnership with Sea Demons Dive Club. "
Cire, January 2017 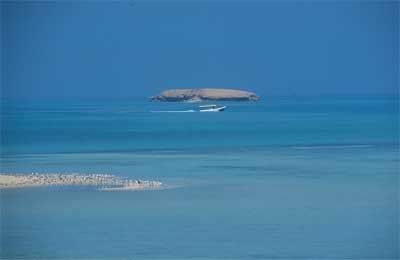 "Having dived with a company called Dream Divers i will never again think "what has Saudi Arabia to offer?" Without question some of the most exiting diving I have ever done, and we have some good diving in Oman. Thanks to the Crew and Alex the Dive Master: I always felt safe even though the weather was rough."
Tahar

"I dive with compagnia Dream diver to Farasan Bank: wonderful. Gratsi mille - many thanks - Eric, Capitano Levi and Alex."
Adriano

"Have started diving with Dream Divers they are the most truthfull dive club in the area. They tell you what to expect and don't build it up to be what it is not. The only other thing I can say about them that if it is safe, if you are up to it, they will go for it. Too many of these clubs tell you where is good for them. And they do protect the reef. "
Ekky

"I take training of SCUBA Diving from Dream Divers. They have good instructor one of them his name is Nelson Suan he is really great and now I am padi diver. I am planning to go on Dream Voyager, the only live aboard in Saudi Arabia."
Sayed Zahur

"Jeddah, although overdived and overfished still has some beautiful coral reefs and not many boats. Dream Divers are offering the only two liveaboard Dive Boats in Saudi Arabia, number three arriving in May of 2006. We are working the Farasan Banks on the Southern Cruise and Yanbu, Ummludjje on the Northern cruise these areas are a gift from God with no other dive boats to be seen virgin reefs and numerous species of reef and pelagic fish to be seen the trips are weekend long weekend 7 or 14 days."
Eric Mason, Dream Divers

"I enjoyed diving with Desert Sea Divers on the Coral Garden. A combination of the late afternoon lighting and the spectacular size of the coral heads made the site particularly memorable. Visibility excellent and though fish species were diverse most were small and harmless...wonderful day."
Denise A. McCracken

"I completed my Open Water Diver trained in the Red Sea, around Yanbu. Many of the Local boat owners will take Instructors and Groups of divers out for Two or Three dives in a day. A set of reefs called "The Seven Sisters" are a popular dive haven. I was always taken care of and helped with my equipment. An experience I would like to repeat. Many thanks to Hassan, Ayman and the Blue Reef Dive shop in Yanbu. "
Ray East, 2008

"I own a Shark Bay Diver diving center. We train TDI and SDI, organize cruises in Jeddah, and develop our technical and recreational diving trips. Also entertainment trips .."
Amr Gusti

Our thanks to Capt. Victor Organ, Eric Mason and Dr Hasan Ibrahim (Diving Medical Officer at Jubail Armed forces hospital ) for their help and information.

Please add your comments on diving in the Red Sea. Have a question? Do you want to recommend a dive operator? Let us know.

Some very truthful and factual comments above you dont see that so often anymore and unfortunately the reefs are getting worse, spear fishing on the whole is banned there have been some wicked fines in the last few month 5,000sr per gun and 1,000sr per fish and the Captain of the vessel and the Group leader sit in the Coast Guard Station for about 6 hours yes they learn a lesson for sure.
Cire , 16 January 2017
I want to know to know the amount to attend the diving school
Edidiong , 16 May 2016

The cost varies, get in touch with some of the schools listed above and ask them their prices. Let us know how you get on.
Jill Studholme, SCUBA Travel