31 January 2021
From Sharm El-Sheikh you can dive Ras Mohammed, Ras Umm Sid, the Straits of Tiran and wrecks like the Thistlegorm and Dunraven. You can dive year round but the water is cooler in winter. November is a good time to go - warm water and a pleasant air temperature.

See also our page on recommended diving centres and liveaboards in Sharm El-Sheikh. 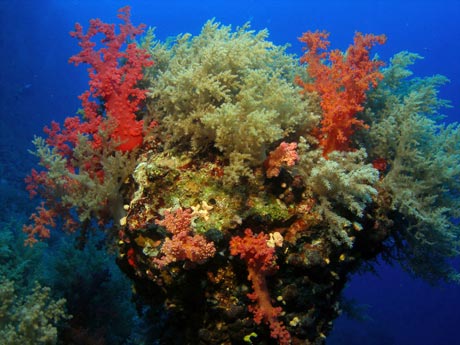 "We've been diving in Koh Tao, Cyprus & South Africa. Snorkelling a few other places. It's in another league."
Joel Bronkowski, UK, February 2017

"Sharm has a good spots to dive but only rarely you'll see sharks. The only way to be almost sure to see some hammerheads is in the summer by the morning in jackson reef. You need at least 6 people to make the trip and must be at least advanced diver. If you want to see blue spotted stingrays and groupers and turtles of course its good to come to Sharm but if wanting to see some sharks better go to Elphinstone. I went to Sharm twice and saw a oceanic white tip in Middle Garden I think it was the first time and we were all already out of the water "
Francisco, Brazil, February 2011

"I loved all the sites, with Shark reef and Yolanda among my favorites. I was impressed with the number of fish and species. I have been to Belize, Roatan and the Bahamas prior to my October trip to Sharm. The numbers of fish in the Red Sea were huge by comparison. See what comes when you protect the reefs for 50 or more years! "
Jay, USA, 2008

Jackson reef is marked topside by a rusting wreck. Beneath the sea the reef is covered with beautiful corals and anemones. Look out into the blue for the chance to catch sight of pelagic species like hammerhead sharks. "Drift dive on south side - Jackson is a jewel for fans of coral and lots of fish - Jaw dropping underwater scenery and kaleidoscope colours!"
Will O'Hea, UK, 12 March 2018

"Getting lost in the colours, a coral grouper under every coral head, the thrill of hammerheads in the summer and fun in the currents! "
Jen

A beautiful reef and our boat was the only one there so we weren't cramped for space!
Alex

A technical dive, looking up from inside Thomas canyon gives you the chance to experience the sheer walls and 4atm of water stained in different shades of blue that you dreamt of after reading those scuba mags in the newsagent as a kid...
Ethan Fox

Absolutly fantastic, might be beyond limits for recreational diving but well worth doing a course just to see it.
Brendan Lund

One of the best dives (that we did around Tiran Island) was probably the shallowest, to the wreck of the Kormoran. Located north of Tiran Island, the twisted structure of this large container ship is only six to eight metres below the surface and is surrounded by prolific coral that has been stained by the ship's cargo of phosphorous. The torn metal provided an insight into the sheer power of the sea.
Dave Thompson, UK

One of the prettiest coral reef walls I've ever drifted by, the disney of diving.
Dean Evans

My fourth dive of the trip was the most memorable, a speed boat ride to the dive site named Million Hope, the wreckage of a 26,000 ton bulk carrier that is over 560 feet in length which sunk in June 1996 and is said to be the largest ship ever to be lost in the Red Sea. Lying in 24 metres of crystal clear blue water and sitting on a sandy bottom, some of the upper deck is still visible above the water. A massive hole in the hull provides the opportunity to swim inside the ship. Elsewhere the cargo holds are empty after a long salvage operation, but the space provides a haven for thousands of colourful fish of all shapes and sizes. Coral is starting to grow on the deck of the ship which picks up the sunlight shining from above, giving an effect of disco lights as the various colours are picked out. Rammy my dive buddy and guide from Aquarius Dive Centre has visited the wreck so often that the locals have renamed it Rammy's wreck. His knowledge of what lies inside the ship out of sight of many divers provided me with a growing confidence that intrigued me to see more.

Following Rammy down inside the dark rooms, one by one we travelled deeper until we got to the tool room and finally the engine room, but only with Rammy's torch were we able to see the workbench and huge metal tools, each one sitting in its holder as they did when the ship hit the reef and sunk 16 years ago. The more I saw the more I was fascinated, it was a truly remarkable experience, but a quick look at my gauges signified that I had used up my allotted amount of air, and it was time to start our ascent to the surface.
Dave Thompson, UK

Ras Mohammed is the headland at the southern most tip of the Sinai Peninsula, overlooking the juncture of the Gulf of Suez and the Gulf of Aqaba. A marine reserve since 1983, includes Shark and Yolanda reefs, and the straits of Tiran.

The best dive site I’ve ever seen. The coral reefs and the sea life there are an absolute treasure.
Fady, 2018

Currents make this good for drift dives and for pelagic fish. A popular dive starts at Anemone City before drifting to Shark Reef and its drop off. Finish up on the wreck of the Yolanda with its cargo of toilets. Currently voted one of the top ten dives in the world.

"May be crowded but still spectacular "
Magnus Cowie, July 2019

"I have been diving there before and its amazing place where you can found all of kind of fishes and so beautiful corals."
Yossef, December 2017

"Just the most incredible reef gardens, so much colours and little fish with the occasional big fish too"
Cindy, UK, 2014

Best done as a drift dive dropping in on Anenome City. Then swim across blue for a few minutes to hit shark reef, a huge pinacle with a sandy plateau at about 9m on one side and a drop off to infinity on the other! Whichever side you choose the current will take you on to Yolanda reef, another pinnacle with the scattered cargo of toilets and the remaining part of the Yolanda. Fantastic colour, soft corals, every type of small fish, as well as huge Napoleon Wrasses, turtles, giant morrays, rays, jacks, tuna, barracuda and sharks. Stunning!
Jon Hill

Our first dive of the day was Shark and Yolanda Reef which offers spectacular coral, bizarre fauna and a great selection of fish that included several huge moray eels, a couple of crocodile fish, several pairs of lion fish and our first ever sighting of a rare scorpion fish which is a magnificent pink, yellow and turquoise, plus a couple of huge turtles. One of the most unusual visual effects in the world is created by the hundreds of toilets, sinks and bath tubs that are scattered across the soft white sand around the wreck of the merchant ship Yolanda which sank in 1980 together with its cargo of porcelain toilet fittings.
Dave Thompson, UK

The exhilaration of the wall followed by the beauty of the corals round Yolanda. Getting lost in the awesome schools of snappers, emperors, unicorn fish, jacks and barracudas in the summer. Wow.
Jen

In Ras Muhamed national park Shark and Yolanda reef is beautifully preserved. In the summer months many fish school in this area and you have an oppertunity to see the strange cargo of toilets from the wreck Yolanda. A visit to the blue also always uncovers other bigger fish such as shark.
Russell Welch

Diving along the reef wall which is spectacular itself and witnessing the astonishing variety of marine life. Spotted a oceanic white tip, manta ray, and a green turtle all on the very same site!!! Mohamed Sakr, Kuwait, February 2011

Wonderful aray of fish life on it including turtles. Stephen, 2011

Stunning visibility, lots of fish, Large schools of barracuda, Jack fish, Keep an eye out for spotted stingrays and in the Blue perhaps a Whaleshark. Gerrit Booyens, 2010

Out into the blue and saw dozens of hammerheads, Huge Napolian Wrasse watching over toilettes, giant Puffers. Awesome. Jay, USA, 2010

Easy to get to, and with some great currents! Mike O'Neill, 2009

I saw my first shark and historical amphoras in Yolanda reef. Alan Welton, 2007

Starts with a great cave dive. Once again we were treated to an array of coral, fauna and spectacular coloured fish of all shapes and sizes, plus another sighting of a turtle.
Dave Thompson, UK

For details of the wrecks near Sharm El-Sheikh, see our Wrecks Diving in the Red Sea page. This includes details of the Thistlegorm, Carnatic, Ghiannis D, Chrisoula K, Barge at Bluff Point, Ulysses, Rosalie Moeller, Dunraven and Kingston.

Sharm El-Sheikh: Diving Guide and Integrated Logbook
by Rik Vercoe, Travelling Diver, (2008)
Features 16 dive sites, including the wreck of the Thistlegorm and the Shark and Yolanda Reefs. The sheets are attractively laid out and easy to follow. There is a space for you to enter the particulars of the dive: maximum depth, surface interval, temperature, etc. Then comes the information. First the site overview giving a brief description of the dive. For example, the Shark and Jolanda entry says "Part of the Ras Mohammed marine park, this is one of the most famouse dive sites in the Red Sea. Shark & Jolanda offers shark sightings, exciting drift dives and an unusual cargo of porcelain toilets, from the wreck of the Jolanda". Read our review...

Shipwrecks from the Egyptian Red Sea
by Ned Middleton, Hardback, Immel Publishing, 196 pages, 2006.
The author spent over 8 years engaged in dedicated research into the many shipwrecks which are found in this part of the world. There are nineteen major featured shipwrecks - including two which are only recently discovered. These are followed by brief details of another eighteen vessels which were too small to be classified as ships - tugboats, barges etc. Finally, there are brief details of approx. 250 additional vessels that are either not yet discovered, far too deep for scuba divers or never even existed.

Add your comments on diving in the Red Sea. Do you want to recommend a dive operator or dive site? Let us know.