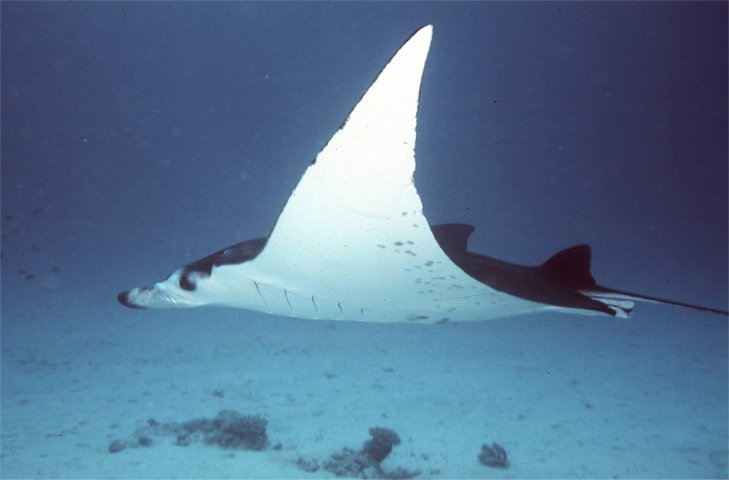 Awesome to see underwater, the Giant Manta Ray is an enormous fish spanning nearly 7 m (22 feet). They live in warm waters around the world, gracefully flying through the water with steady sweeps of their giant wings.

Why are Manta's so Big?

Completely harmless filter-feeders, Manta rays use their head fins to direct plankton into theur mouths. As plankton occur near the surface of the seas, that's where Mantas are also found. Filtering your food out of the oceans doesn't take much energy, which is why Manta rays can be so large.

Manta rays sometimes leap out of the water, falling back with a splash. This is thought to remove parasites, or perhaps be a show of territorial rights. However, Mantas both collaborate when feeding and follow the plankton, so the latter seems unlikely.

Vulnerable in Spite of their Size

Mantas migrate vast distances, crossing international boundaries, in search of food. Products from manta rays have a high value in international markets, and targeted fisheries hunt them for their valuable gill rakers used in traditional Chinese medicine. Monitoring and regulation of the exploitation and trade of both manta ray species is urgently needed, as well as protection of key habitats.

Another factor which adds to the vulnerability of the Manta ray is its low reproductive rate. In the wild, females bear on average only a single pup every two to three years. Female mantas are thought to mature at around 8 to 10 years of age and to live to around 40 years.

Where to dive with the Giant and Reef Mantas?

Dive tourism involving Mantas is a growing industry. More money is made from live mantas than from the dead, caught mantas. A recent study estimates direct revenue to dive operators from manta ray dives and snorkels to be over US$73 million annually. Money made from associated tourism expenditures is put at US$140 million. However, tourism related industries can also negatively impact individual behaviour, entire populations and critical habitat. Tourism needs to be developed responsibly, with the needs of the animals respected.

Both species of Manta are found around the globe, their ranges overlapping in some places like Mozambique. It is difficult for a diver to distinguish between the two species. Both can be shades of black or white. They are also sometimes confused with the devil rays of the genus Mobula.

The Giant Manta Ray appears to be a seasonal visitor to coastal or offshore sites. While this species seems more solitary than the Reef Manta Ray, Giant Manta Rays are often seen aggregating in large numbers to feed, mate, or clean. Sightings of these giant rays are often seasonal or sporadic but in a few locations their presence is a more common occurrence. At certain times of the year you can see the Giant Manta Ray at aggregation sites such as the Similan Islands, Thailand; northeast North Island, New Zealand; Laje de Santos Marine Park, Brazil; Isla de la Plata, Ecuador; Cocos Island, Costa Rica; and Isla Holbox, Mexico. Being oceanic, you see them less frequently than the Reef Manta Ray.

The Reef Manta Ray is found from the Sinai Peninsula in the Red Sea to Durban, South Africa in the Western Indian Ocean, and from Thailand to waters off Perth, Western Australia in the Eastern Indian Ocean. In the eastern and south Pacific, the Reef Manta Ray occurs from the islands on Ryukyu Arc, Japan in the north to the Solitary Islands, Australia in the south and is sighted as far east as French Polynesia south of the equator and Kailua Kona, Hawaii north of the equator. Reef Manta Rays do not commonly venture from coastal waters, often moving between inshore cleaning stations and feeding areas. The Reef Manta Ray can reach 5 m across, however, most mature individuals do not exceed 4 m.