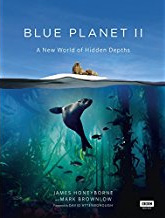 The Blue Planet series, from the BBC, took 5 years and £7 million to make. And viewing the series this isn't surprising. As divers know, for every dive you see spectacular examples of the behaviour of large oceanic animals like sharks, dolphins or manta rays, you can spend many hours in the water being satisfied (or enchanted) with tiny nudibranchs or crabs.

The Blue Planet DVDs exhibit the gamut of sea creatures, from killer whales stalking a grey whale and her calf to the transparent, beautiful and sometimes grotesque oddities of the deep seas. The animals are accompanied by orginal music from George Fenton, who was also responsible for the scores for Groundhog Day, The Madness of King George and Cry Freedom.

All parts of the oceans are covered. The extraordinary life frantically growing and reproducing at the vents of underwater volcanoes and spreading faults, dependent on sulphur metabolising bacteria. The freezing Arctic and Antarctic, and of course the coral seas, coastal waters and tidal marshes.

Whether you choose the DVDs or book - you won't be disappointed.