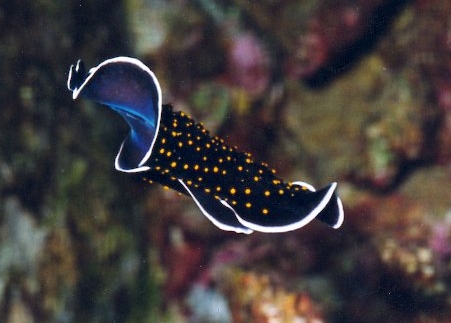 Flatworms look very similar to nudibranchs: they are beautifully coloured, the same shape and may move similarly by muscular propulsion. However, they have thinner bodies than nudibranchs and also move by beating hair-like cilia on their undersides - rippling through the water. Some have short tentacles on their heads.

Flatworms are bilaterally symmetrical animals. The left and right sides of the animal are the same but the underneath and top are different. This is common in higher animals, but flatworms are one of the most simple creatures to exhibit this. Their eyes are tiny, comprising just 2 to 3 cells. There are hundreds of eyes along the sides of the body, distinguishing between light and dark and determining the direction of light. They have two other types of sensors. One is sensitive to chemical stimuli, perceiving far-off substances and sensing them on contact (smell and taste). Another is stimulated by the passage of water over the flatworm's body and perceived by rheotactic sensors. The flatworm's simple brain can interpret information and even has the capacity to learn.

Like nudibranchs, some flatworms utilise nematocysts - the stinging cells they obtain when eating fire coral or other hydroids. These are not digested but passed to the body wall as a form of defense. Mobile flatworms are carnivorous, and feed on slow-moving, sedentary or dead animals. Many capture living prey by wrapping themselves around it, entangling it in slime and pinning it to the ground. A few species may stab their prey with their penis!

Flatworms have amazing regenerative capabilities. When cut into a number of pieces, each will develop a head, tail and full complement of organs.

Although common, divers rarely see flatworms as they hide under rocks, dead coral or seaweed. When spotted they are often mistaken for nudibranchs. Look carefully at these pretty animals - the nudibranch you've seen may not be a nudibranch at all.