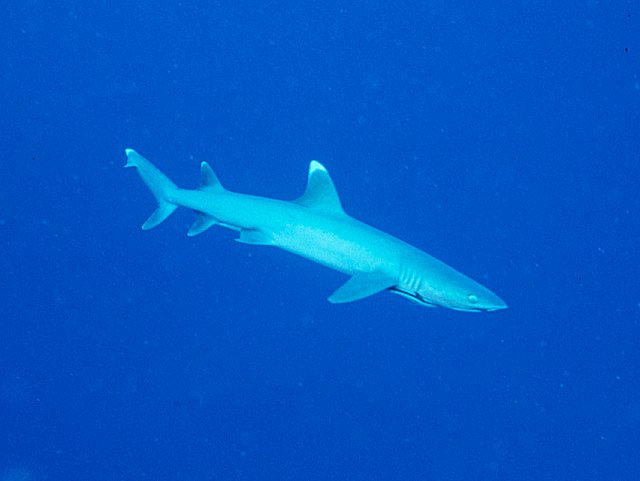 For many, the presence of a shark makes a dive, and the Whitetip Reef Shark is the one you are most likely to see in the Indo- and Eastern Pacific (Red Sea, Australia, South Africa, Maldives, Philippines, Costa Rica, Galapagos, etc.). Easily recognised by the white tips on its dorsal fin and tail, and its relatively slim body, it is harmless unless provoked. You often see it resting on the bottom - particularly in channels or caves.

As its name suggests, the reef shark prefers shallow water. This, and its lazy day time habits, are why it is so often seen by divers.

The shark hunts at night, sometimes in packs. It finds moving fish by homing in on the small electrical impulses they emit. However, even inactive fish are not safe as the shark can smell them. It prefers medium sized fish like damselfish, wrasse and parrotfish. These hide themselves deep in the coral, out of reach of the white tip's large head and mouth. Other foods include octopuses and crustaceans.

It takes around 5 years for the Whitetip Reef Shark to matures and give birth to live young. Litters of two or three pups are normal, which can live for 25 years.