27 March 2020
Welcome to our eclectic diving, ocean and marine life dictionary. If you can't find what you are looking for please let us know.

In International maritime signal flags indicates "Diver Down". Raised in boats when divers are below the water. Used in Europe, Australia, Canada, New Zealand, South Africa and other Commonwealth countries.
Air Embolism
An air bubble trapped in a blood vessel. Might occur during too fast an ascent or if breath is held when ascending. The bubble can stop blood getting to body tissues.
Anadromous
Migrating up rivers from the sea to breed in fresh water.
ANDI
American Nitrox Divers International. Specialise in training programs for technical diving and closed circuit rebreather systems.
Aqua-Lung
The first commercially successful open-circuit, self-contained underwater breathing apparatus, using a demand regulator. Invented in Paris in 1943 by the Emile Gagnan and Jacques Cousteau. More on the aqua-lung...
Barotrauma
Injury to the middle ear caused by a rapid change in pressure. May result when ears aren't cleared on a descent.
BCD
Buoyancy compensator device. Worn by divers to maintain neutral buoyancy.
Bends
See Decompression Sickness
Benthic
Bottom dwelling: living on the floor of the sea or lake.
Bioherm
A solid ediface built by sea creatures, for example a coral reef.
Bottom Line
A line back to an ascent (shot) line. Useful in reduced visibility.
Boyle's Law
PV = k, where P is pressure, V is volume and k is a constant. Means that if pressure decreases (such as during an ascent) then the volume of gas increases (assuming temperature is constant). And vice versa. Why you need to add air to your BCD when you descend, and release air from your BCD when you ascend.
BSAC
British Sub-Aqua Club. The BSAC is the governing body for the sport of scuba diving in the UK. It is a club-based organisation that offers training for members through a branch, or intensive courses through a BSAC school.
Buddy
Diving partner.
By-catch
Living creatures which are caught unintentionally by fishing gear. Bycatch includes those fish captured by fishers (both commercial and recreational) that are undersized, prohibited, inedible or unsaleable. It also includes dolphins, albatrosses and turtles.
Catadromous
Migrating down river to breed in the sea.
Cerata
Finger-like projections on the back of a nudibranch (sea slug). 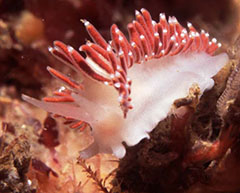 CESA
Controlled Emergency Swimming Ascent. It involves finning up while exhaling to keep expanding air in the lungs from causing lung expansion injuries. It is used when a diver is out of air, and no other air source is available.
Chart Datum (CD)
The level of the lowest tide there has ever been at a particular place. All depths on a chart and heights of tide refer to it.
CITES
The Convention on International Trade in Endangered Species.
CMAS
Confédération Mondiale des Activites Subaquatiques (World Underwater Federation of Underwater Activities). Diving agency established 1959.
Coral Triangle
Holds the highest concentration of marine species in the world. Located in waters off the coasts of Indonesia, Malaysia, Papua New Guinea, the Philippines, Solomon Islands and Timor-Leste; the Coral Triangle covers almost 1.6 billion acres – an area about half the size of the United States.2
Cosmopolitan Marine Species
Species which occur around the world. Examples include hammerhead sharks, leatherback turtles and moon jellyfish.
Crepuscular
Appearing or active at twilight.
DCBC
Diver Certification Board of Canada. The DCBC certifies occupational divers, accredits schools which train occupational divers and presents the annual Canadian Underwater Conference and Exhibition.
DCS
See Decompression Sickness
Decompression Sickness (DCS)
Also known as the bends. Caused by too rapid an ascent resulting in nitrogen bubbles which may expand and injure tissue or block blood vessels. More at Decompression sickness research archive.
Demersal
Living on the sea-floor.
Deviation
The angle between compass north and true north.
Diel
Describes events that occur with a 24 hour periodicity. See also diurnal and nocturnal.
Diurnal
Refers to events that occur during the day
Diver Down Flag

See also "A Flag". Indicates that a diver is beneath the water.
Dorsal Fin
The fin running across the back of the fish.
Emarginate Tail

Shaped as in the diagram to the right.
GUE
Global Underwater Explorers. Non-profit organisation dedicated to the training of divers as well as the study and protection of the aquatic realm.
Hectocotylus
The modified arm of a male octopus or squid, used to transfer sperm to the female during reproduction.
Hermaphrodite
Having both male and female reproductive organs.
Housing
A housing is a waterproof underwater casing for your topside camera that gives full control when diving. If you are interested in learning more, Bluewater photo have a great guide to underwater housings and cameras.
HWL
High water level.
Hydrothermal Vent
Place on the ocean floor where a continuous flow of superheated, mineral-rich water flows up through cracks in the Earth's crust.
Hypothermia
Body chilling. A fall of more than 2 oC of the body's core temperature.
IANDT
International Association of Nitrox and Technical Divers. UK organisation offering training courses from Open Water Diver through to Expedition Trimix.
ITDA
International Technical Diving Agency.
LWL
Low water level.
MHW
Mean high water.
MLW
Mean low water.
msw
Metres of seawater: a unit of pressure. The pressure exerted by seawater varies slightly with temperature and salinity, but for practical purposes the convention is that each meter imposes a pressure of 0.1 bar. Sometimes the convention is that each meter is equivalent to 0.1 atmosphere (0.1013 bar).
NASDS
National Association of Scuba Diving Schools. In 1999 NASDS merged with Scuba Schools International.
Narked
See nitrogen narcosis.
NASE
National Association of Scuba Educators. Draws its experience from the fields of commercial, recreational, technical and cave diver training.
NAUI
National Association of Underwater Instructors.
Nematocysts
Stinging cells such as those possessed by sea anemones. 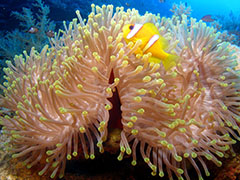 Neritic zone
From the low-tide line to the to the edge of the continental shelf - around 200 m. After the neritic zone comes the pelagic zone - or open ocean.
Neutral Buoyancy
Where a body's density is equal to the density of water in which is immersed so it neither sinks nor rises. Essential to establish when diving.
Nitrogen Narcosis
When an increase in the partial pressure of nitrogen breathed causes an effect similar to alcohol intoxication. When breathing air may occur below 30 m. It is reversed by returning to shallower depths.
Nocturnal
refers to events that occur at night.
PADI
Professional Association of Diving Instructors.
PSAI
Professional SCUBA Association International. The oldest technical / extended range scuba certification agency.
Pectoral fins
The pair of fins at the front of the fish, behind its head.
Pelagic zone
The open sea.
Photic zone
The sunlit surface waters.
Polyethylene
A plastic of which granules are used in most hand lotions and face creams as exfoliants. Majority of granules are washed out to sea and ingested by plankton and thus the rest of the ocean food webs.1
Pulmonary barotrauma
Burst lung. Caused by excess air pressure within the lungs compared to the surrounding pressure, for example if a diver ascends whilst holding her breath.
RIB
Rigid-hull inflatable boat.
Rip Current
Strong currents running out to sea. Also known as a rip tide. Dangerous for swimmers. Can be spotted as a rippled patch of sea when the water around is calm. If you are caught in a rip current swim across it, not against it.
SAA
Sub-Aqua Association. British organisation.
SCUBA
Self-Contained Underwater Breathing Apparatus.
Sclerite
See spicule.
ScotSAC
Scottish Sub-Acqua Club. The National Governing Body for the sport of diving in Scotland.
SDI
SCUBA Diving International. Qualification agency created in 1999. It grew out of sister company TDI, which specialises in the more advanced disciplines of technical dive training.
Seafloor Relief
Not a charity to help the seabed (although perhaps there should be one called that) but the terrain or topography of the seafloor.
Seamount
Officially steep-sided extinct volcanoes beneath the ocean surface at least 1000 m hight. Divers call any tall, underwater, peak a seamount.
Shot Line
A line to descend or ascend along.
Spicule
Hard, needle-shaped, calcium carbonate skeletal structure contained within soft corals. Also known as a sclerite. 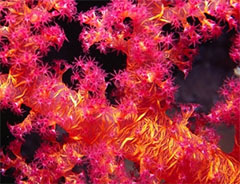 The yellow needles are the spicules in this soft coral (Dendronephthya sp)
SPOT Tags
Smart position and temperature tags. Record, for example, temperature and depth, and send logged data to satellites at regular intervals. Used on animals who spend time at the surface, like dolphins and turtles.
SSI
Scuba Schools International. In 1999 SSI merged with the National Association of Scuba Diving Schools.
SSAC
Scottish Sub-Acqua Club. The National Governing Body for the sport of diving in Scotland.
Swell
Casued by waves formed by past wind, or wind at a distance.
Tail: Emarginate
See Emarginate.

Tail: Truncate
Shaped as in the diagram to the right.
TDI
Technical Diving International
Thermocline
Abrupt temperature gradient between the warm upper layer of water and denser cold water below.
Tidal Range
The difference in height between high and low water.
Truncate Tail
Shaped as in the diagram to the right.
Zooplankton
The animal constituent of plankton.
Zonation
The system used to describe fringing coral reefs. These reefs are commonly have six distinct areas (or zones): shore, back reef, flat reef, reef crest, fore reef and drop-off.
Zooxanthellae
Microscopic algae that live in the tissue of reef-building corals. Pronounced zoo-zan-thelly.

What have we Missed?

Is there a diving or marine term we've missed that you would like explained? Let us know.