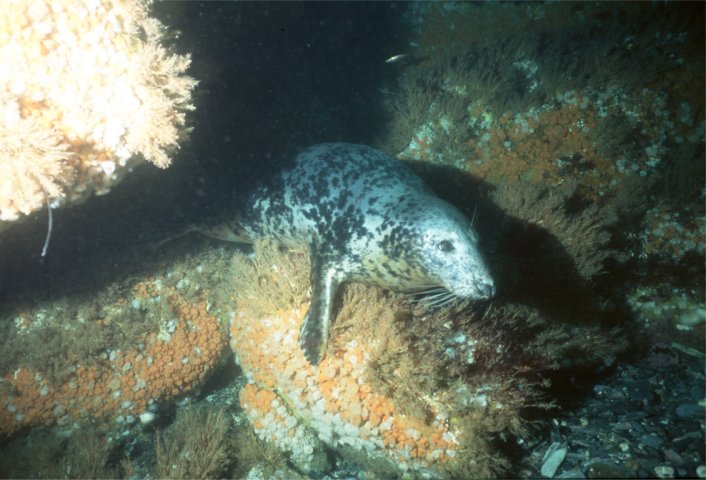 Grey seals live in the North Atlantic Ocean. Half of the world's population are found on and around British coasts, and numbers here have doubled since 1960. However, the northeast Atlantic population as a whole (from Portugal to Norway and Iceland) is considered to be Endangered by the 2000 IUCN Red List. In many countries the seals can legally be killed for damaging fishing nets.

Grey seals come ashore to breed on exposed rocky shores. The females arrive at the breeding sites first, to give birth. When the males come ashore they compete for space nearest to the females. The oldest males get the best positions, but there is little fighting.

They feed mainly feed on fish, but will also sometimes take squid, octopus and crustaceans.

There are frequent calls for culls of grey seals - particularly in Canada, the United Kingdom and Ireland - by fishing interests who claim that seal predation is the reason behind reduced fish stocks and that a reduction in the number of grey seals would result in an increase in the amount of commercially landed fish. There is however no scientific evidence to support this argument.

There is a great variety in grey seal coat coloration and shading. Adult males, and some older adult females to a lesser extent, have a recognisable long "Roman" nose with wide nostrils, giving the species its name "horsehead" in Canada and its Latin name that translates as "hooked-nose pig of the sea".

Their lifespan generally ranges from fifteen to twenty-five years, but the oldest recorded living grey seal is 46 years old.