5 March 2020
Chuuk Lagoon is famous in diving circles for its World War II wreck dives. More than 60 Japanese ships and aircraft were sunk by the US Navy in February 1944 during Operation Hailstone. Better known by divers as Truk Lagoon, nowhere else in the world can you find so many wrecks in such clear water.

When to dive Chuuk Lagoon?

You can dive year round. Sea temperature is constantly between 27 and 30 oC. Topside the temperature ranges from 24 to 31 oC and it is warm and humid throughout the year. May to October sees the highest rainfall, but it rains quite often even in the drier months. From November to June the tradewinds blow in from the east or northeast: the winds are generally light from July to October. You are likely to see sharks throughout the year, but the main reason to go is for the shipwrecks. 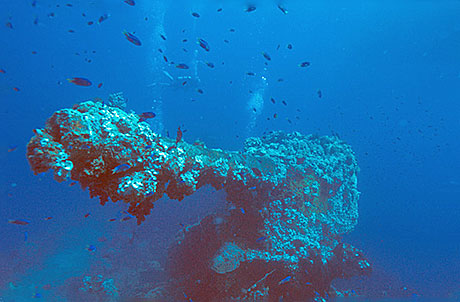 Gun on the Fujikawa Maru

The best wreck dives include the San Francisco Maru, Fujikawa Maru and the Nippo Maru. 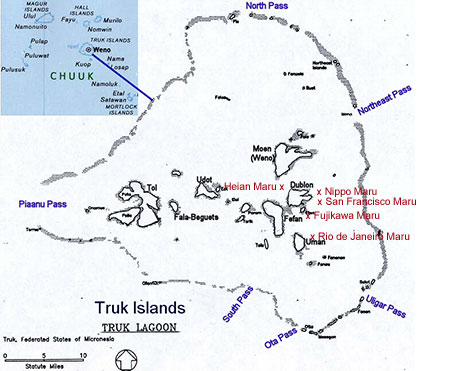 Where is Chuuk Lagoon and how to get there?

The area is part of Chuuk State within the Federated States of Micronesia. Chuuk Lagoon is over 2000 miles east of the Philippines in the Pacific Ocean. It's remote - the nearest states to Chuuk are Guam at 1000 km to the north east and Palau at 1800 km to the west. It has an international airport (TKK) but only flights from Guam and the Marshall Islands go there. You can fly to Guam from, for example, Japan, Korea and the Philippines. Guam is a territory of the United States and so when travelling via Guam you need to complete an ESTA. ESTA is an online system that tells you whether you're eligible to travel to the United States (including Guam) under the Visa Waiver Program (VWP). You will need to clear US immigration in Guam, and this can take hours! Leave plenty of time between flights.

How to Dive Chuuk Lagoon?

You can dive here by liveaboard or from a land-based dive resort.

Chuuk lagoon consists of a coral atoll with a circumference of 225 kilometres (140 miles) - one of the longest barrier reefs in the world.. Eleven islands lie within the lagoon. These comprise more than three-quarters of the total land area of Chuuk State.

During World War II Chuuk Lagoon was home to a Japanese naval base. The giant lagoon (commonly then known as Truk) is sheltered and provided a natural harbour for the ships. Airfields were built on islands within the atoll. In February 1944 the United States launched Operation Hailstorm against the Japanese fleet. Over two days the Japanese lost 50 ships and over 250 planes. More raids against Truk came in the following months.The wrecks still lie where they were sunk over 70 years ago. Many are now covered with colourful soft corals and sponges.

Divers go to Chuuk Lagoon for the wrecks, but with the bonus of the rich, diverse marine community which has made its home on and around the wreck surfaces making they extraordinarily beautiful. The soft coral and sponge primary colonisers provide food and habitat for small fish and other organisms which in turn attract bigger fish up to barracuda, groupers and sharks. Two of the wrecks feature in the list of the world's best wreck dives, namely the San Francisco Maru and the Fujikawa Maru. (Many of the ships have the suffix "Maru". This is commonly used when naming merchant ships.)

In 1969 the Jacques Cousteau team explored Truk Lagoon. At this time the identities of most of the wrecks were not known. The expedition dived on many shipwrecks including the San Francisco Maru. 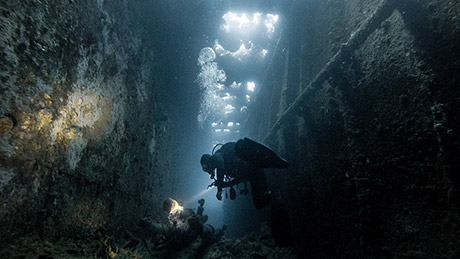 Magnificent wreck with cargo of Zero fighter planes in one of her holds and heaps of artifacts. The San Francisco Maru was a Japanese cargo ship powered by steam and built in 1919. During the war she carried Japanese Navy military cargoes. Needing repairs she arrived in Truk on 5 February 1944. The ship sank and five crew members died as a result of the attacks on 17 Feb. It is one of deeper wrecks, lying upright on the bottom at 64 m. There are three armoured tanks at 50 m. The foremast stands upright between the two foreward holds. She was carrying ordnance in preparation for the expected landings by the US. These included mines, artillery shells, light tanks, bombs and torpedoes. You should assume much of this is still dangerous and be careful around it.

In 1969 the Jacques Cousteau team explored Truk Lagoon. At this time the identities of most of the wrecks were not known. The expedition made many dives, including discovering the San Francisco Maru.

"75 year old "million dollar" wreck with deck at 165'. Three small Japanese tanks still on the deck, gun mounted on bow, trucks and mines lining the front hold. Top of mast at 100' and densely covered with a variety of sealife. "
Jim, 14 May 2019

"Very Deep but a great dive for the untouched undamaged wreck that sits there. "
Brad, Australia, 13 September 2016

"Tanks on the deck and other armaments, sunk during the US raid on the Japanese supply fleet after The destruction of Pearl Harbour, extremely photographic in warm water, sitting upright, a must see. "
Jackie Bone-George, Australia, 1 July 2013

Built in 1938 as a passenger-cargo ship, in 1940 the ship was requisitioned by the Japanese Navy for use as an armed aircraft transport. Once of the most popular, and most written-about, dives in Chuuck Lagoon. The wreck lies between 12 and 35 m (40-115 ft). A highlight is penetration of the engine room. It is also an excellent night dive. 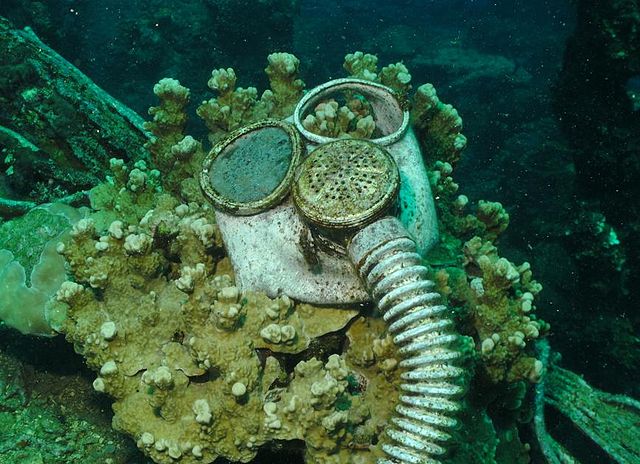 Between decks there is a bank of gas cylinders. Beer bottles are scattered around. Another point of interest is the stern gun.

"Picture perfect shipwreck - awash with coral and sea life. Each of the five holds offer exciting finds, however the highlight for me was the massive engine room which occupies the midships area, taking up 3 floors.
Andrew Murray

"Magnificent wreck with cargo of Zero fighter planes in one of her holds and heaps of artifacts. Brilliant dive
Paul A Chesterman, Australia, 2013

The Nippo Maru was just eight years old when she was sunk in 1944. She was a 5-hold passenger-cargo ship. During the war she was fitted out to carry water tanks. On 10 February 1944 she was part of a convoy of six ships that arrived in Truk. 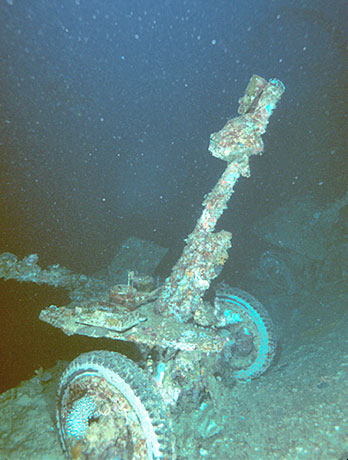 The Nippo Maru was one of the wrecks discovered by the Cousteau expedition. The identity was not confirmed though, until the 1980s when the ship's bell was found. The wreck lies between 27 and 50 m (90-165 ft). A Japanese battle tank is on the deck. Look out also for the twin-barrel anti-aircraft gun and the three Howitzers. Not as much coral on this wreck as some of the others but you may see sharks and you can penetrate the wreck. Extremely photogenic.

"Another excellent wreck has a small Japanese battle tank on the deck. Penetration of this ship is a fantastic experience "
Paul A Chesterman, Australia, 2013

Built in 1940, the Shinkoku Maru was a commercial tanker. The name Shinkoku means devine country. After a start importing oil from the US to Japan, she became a Japanese naval tanker in 1941. The ship arrived at Truk on 14 February 1944, three days before the strikes.

This wreck is popular because of its covering of gorgeous and colourful corals, sponges and other marine life. A spectacular artificial reef. One hundred and fifty metres long, she is relatively shallow (from 10 - 35 m). The forest of soft corals are home to masses of butterfly fish, damselfish and angelfish. Sharks are normally present - gray sharks, white-tip reef sharks and sometimes bull or tiger sharks. A beautiful and thrilling dive. 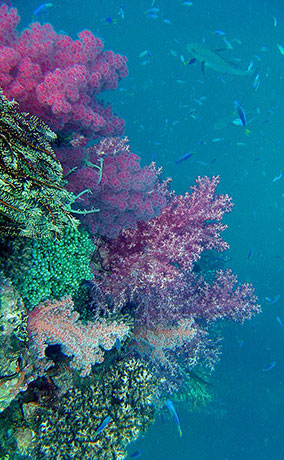 Not only visually stunning, as well as admiring the scenary you can penetrate the wreck. The Shinkoku Maru also makes a great night dive.

Originally an eight-deck passenger liner, the Rio de Janeiro Maru was requisitioned by the Japanese Navy in 1940. She became a submarine depot ship. 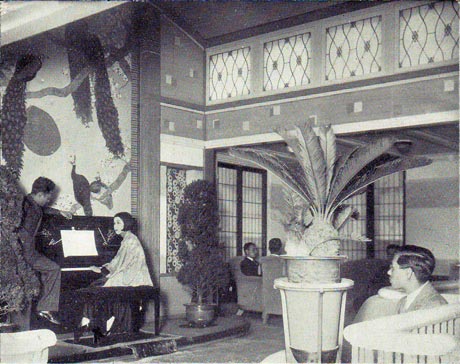 You will find the ship around 400 m east of Uman Island, lying on its starboard side in 33 m. It's a large, spectacular wreck. The large box gun is covered in hard corals. The forward mast reaches out over the sea bed. Scattered around are china and bottles. The 4-bladed twin propellers are enormous. The interior has deteriorated.

Before the war, the Heian Maru carried passengers and cargo between Japan and Seattle. The ship was designed in "old English" style - a major innovation at the time. She was requisitioned by the Japanese government to become a submarine tender.

It is easy to find the Heian Maru as the sea above it appears a yellowy-green colour. The dive often starts with a descent to the hull at 12 m. Swim past the ship's name and deeper towards the bow. Inside the wreck you'll see piles of china, a porcelain water filter, torpedoes and beer bottles. Most impressive are the ship's massive screws. There is a lot to see of the wreck which is 155 m long.

"I penetrated 6 of the Japanese feeder ships. All eerie and in surprisingly good condition. Lots of amo, and parts to feed a war. The penetration was the best I've done (Even better then Thistlegorm). We went deep into the belly of some of the ships. What an experience. Huge Barracuda hanging around on our exit. The ultimate wreck dive experience!!!! Do it!! "
Brendan

There are three liveaboards that visit Chuuk Lagoon, and two land-based dive centres. 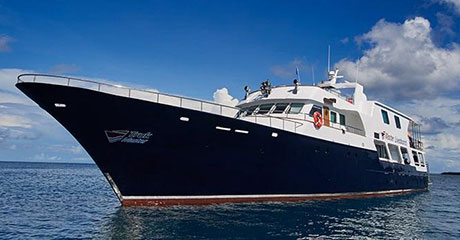 Visits not only Chuuk Lagoon but also Bikini Atoll in the Marshall Islands, home to the wreck of the USS Saratoga. The Truk Master has 8 cabins and can accommodate 16 guests. 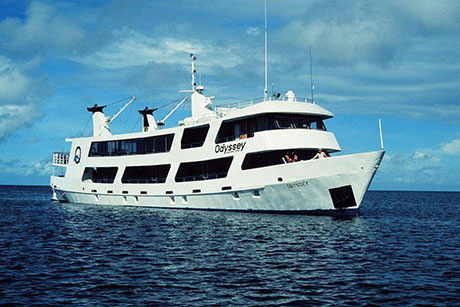 Operate seven-night trips throughout the year and are suitable for divers of all abilities. Free internet and nitrox. Nine cabins - single, twin and double - accommodate 16 guests . 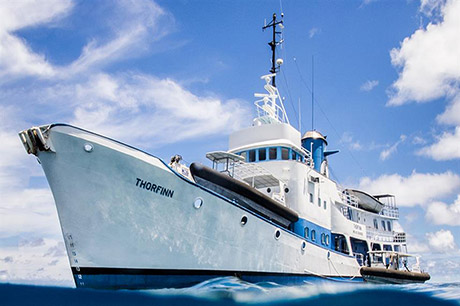 The SS Thorfinn Liveaboard has 10 air-conditioned cabins, 7 of which have en-suite bathroom facilities.

"What a great dive experience, what a great place to relax. I spent 5 days in Truck Lagoon Dive centre. Good people, good food, good centre but best of all - great diving."
CBrendan, 2011

The first dive operation in Micronesia

World War II Wrecks of Truk Lagoon
by Dan E Bailey.
Definitive guide to Chuuk Lagoon - 533 pages covering the history of the area and its wrecks. Illustrated with detailed maps, drawings and photographs. Each wreck has an introductory history of the ship. This is followed by detailed information about the wreck as it appears today on the sea floor.
Read the full review...

1 Truk Lagoon Area Study. Prepared by the Federated States of Micronesia, the State of Truk, and the National Park Service 1989

Please send us your comments on diving Chuuk Lagoon. Do you want to recommend a diving centre or dive site? Let us know. If you own a dive centre get yourself added.