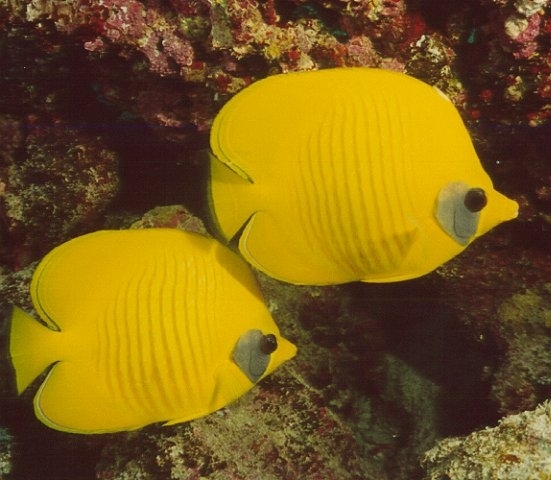 Live around coral, from 3 to 20 m. Very common throughout the Red Sea. Around 23 cm long, the Masked butterfly fish is large for its family. You generally see them in pairs or large groups.

Butterfly fish or Chaetodontidae are small, colourful fishes with a continuous dorsal fin. Chaetodontidae means Greek bristle teeth and indeed they do have small, brush-like teeth. Most species are active during the day, resting among corals or rocks at night. Some species feed on coral polyps, and these tend to be territorial. When part of a coral is attacked in this way, the surrounding polyps tend to withdraw as far as they can into their protective skeletons. The fish then has to move further along the reef.

Most species of butterfly fish patrol a home range. Those that congregate in large shoals are generally planktivores. Many species are heterosexual pairs that may remain together for years, if not life.