5 February 2021
The Maltese archipelago lies at the centre of the Mediterranean, 93 km south of Sicily and 288 km north of Africa. It comprises three islands: Malta, Gozo and Comino. With clear waters and rocky scenery the islands are very good for diving. Indeed, two of her dive sites are amongst the best in Europe: namely the Blue Hole in Gozo and Cirkewwa in Malta.

Diver leaving the Inland Sea on the way to the Blue Hole.
Photo credit: Runeng

There are over 80 ship and aircraft wrecks in Maltese waters, about 15 of which are regularly dived. The Malta Independent paper though goes further and claims that there are at least 800 planes lying on the seabed.

When is the best time to dive Malta?

You can dive in Malta throughout the year. January and February are the coldest months, but air temperatures even then average 13oC with the water being around 16oC. The warmest months for diving are from June to November, when water temperatures range from 20oC to a maximum of 26oC in August.

Almost everyone speaks English with Italian also being widely spoken (and Maltese of course).

Getting to Malta and Gozo

Malta has now reopened its borders to divers. There is one airport. To get to Gozo you take a short ferry ride from Cirkewwa which lasts about half an hour. Ferries run 24 hours.

Many airlines fly to Luqa Airport in Malta, including Air Malta

Or search for options using Skyscanner.

The Dive Sites of Malta and Gozo

The most spectacular stretch of coast is on the west of Gozo at Dwerja. Here you find the Inland Sea. This cliff-surrounded lagoon is linked to the open sea by a tunnel.

Sadly the Azure Window collapsed into the sea during a storm in March 2017. The rubble starts from 10 metres and descends down to some 50 metres. Divers now visit the remains of the Azure Window, but it is unclear how stable the rubble is.

"It is a beautiful sharp drop off into the blue hole with what seems like limitless visibility and literally feels like you are on the very edge of the world. It really is the most extraordinary dive!"
Bianca

"Scenery going to the dive is awesome, looking at the Azure window. Next door is the inland sea, which is a good dive in itself, but if your navigation and air is good the combo is awesome. Start in Inland Sea, down to 10m, through to Ocean down to 22m and keeping wall on left shoulder gradually back up to 15m, across first inland part (10 fin kicks) to join wall on left, then through Azure window and 30 fin kicks to Blue Hole at 12m. If your air is good, then go past blue hole cave entrance and turn right keeping wall on left, and then in through chimney swim-through up to 7m, then back round to right (wall now on right) and rejoin blue hole cave entrance, explore cave before ascent into the Blue Hole itself. Smile at the tourists as you surface. "
Jamie Furness

Entry to dive is down a ladder. Swim to your left along a cliff. Big shoals of chromis.

Enter the water by the 6th lampost. Swim across the bay to a cliff where the cave, or tunnel, is at 6 m. The cave is straight and you can see daylight at either end.

An easy dive with maximum depth of 16 m. The Maori was a destroyer, 115 m long. She was sunk in an air raid in 1942 by German bombers. Half buried in sand only around 40 m of the wreck is left to dive.

"It's a beautiful wreck in Marsamxett Harbour with lots of swim throughs and holes to investigate and a great place to spot the illusive sea horses "
Jane Bell, Malta, December 2012

Um El Faroud was a 10,000 ton tanker. Following a gas explosion during maintenance work in 1995, she was scuttled at Wied iz-Zurrieqoff. She is large - 115 m long and lies, in two parts, between 18 and 36 m. You can swim into the wreck which is one of the best in Malta. This dive is normally done as a shore dive.

"Simply breath taking, I have dived the Thistlegorm and numerous other wrecks. Not a patch on this oil tanker, it was spectacular.
Joanna Davies, 2015

Built in 1890, the SS Polynesien was a French ocean liner which used sail and steam. She was sunk by a torpedo from the German U-boat UC-22 in 1918. She is 152 m long and lies upright between 45 and 63 m, seven miles from Valetta Harbour.

"Massive steam ocean liner Polynesien was torpedoed in WW1 when it was serving as troop carrier. Depth 45-63m. Current (ripping) to be expected. One of the best wreck you will ever see and arguably the best wreck of the Maltese Islands. "
Kevin, Malta, March 2016

"British S-class submarine purposely sunk by the British to act as a ping target. Depth 45-56m. Being a sub, there's not much to see beyond its hull and conning tower, however makes for a splendid wreck dive."
Kevin, Malta, March 2016

The Rozi sits on the seabed at around 36 metres. Her shallowest point is at 30 m. This tug boat was deliberately sunk in 1992 as an attraction for tourists on the glass bottomed boat. An attractive dive site with many fish due to divers feeding them. So good that it has been voted one of the best dives in Europe. 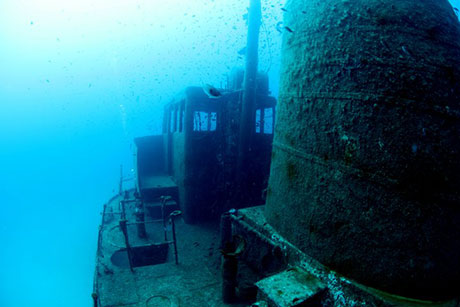 The wreck of the Rozi in Cirkewwa, Malta. Photo credit: Richard Kingfelt.

The Rozi started life in Bristol as the Rossmore in 1958. Renamed first Rossgarth in 1969 and then in 1981 as the Rozi. The tugboat Rozi operated in Grand Harbour, Valletta, Malta. The Tug Boat Rozi is now lying intact except for its engines and propeller in an upright position in about 34 metres of water. The Tug Boat Rozi is one of the most popular wrecks with visiting and local divers.

"Wonderful dive to 36 meters, circumnavigate the wreck and drop to the wheel house to feed the thousands of fish waiting for the divers. Also at Cirkewwa is Right arch: a beautiful full arch to swim up and over and a great place to spot thousands of barracuda
Jane Bell, Malta, 4 December 2012

"A perfect place to go diving: full of colour and adventure. A nice smooth dive where you can see anything from a small jellyfish to a shark.
Danielle, 2008

P29 is one of the two wrecks in Cirkewwa and a very popular dive site. Built as a minesweeper in 1969, she was then called the Kondor I and was part of the German Navy. In 1992 she became a patrol boat for the Armed Forces for Malta. She was scuttled in 2007 as a dive site and artificial reef. The wreck lies between 36 and 21 m, and is 60 m long. You can dive the P29 as a shore dive - the wreck is marked by buoy.

"This mine sweeper is fantastic, guns still in place, such fun to penetrate.
Joanna Davies, 2015

"A perfect place to go and do a couple of hours boat diving and if you want adventure then this is the place to go with the pristine reefs.
Danielle, 2008

Dive at the North West tip of Malta, near where the ferry for Gozo docks. Good access to a little gully to the left of a tower. Down to the left there is at 7 m a drop off down to around 15 m. A few small caves, several wrasse. Worth doing.

"The Blenheim Bomber (plane) is one of the best dives in Malta! Its history is unclear, but when it crashed into the water it landed on its belly, loosing the front of the cabin and nose wheel. It is dived by boat, but not all dive Centers know of its exact location. There is sometimes a current running so it is important to descend as quickly as possible holding onto the shot line which will be provided. This is a dive for more experienced divers only. (Dived with Dive Med.)
Daniel, 2012

The P31 started life as an East German minesweeper. In 1992 she was sold to Malta and renamed the P31. The Maltese used her as a patrol boat until 2009. She was then scuttled as a dive site off the small island of Comino. Comino is car-free and is uninhabited apart from one hotel.

"This is a perfect introduction to wreck diving, dropping off from the boat you can clearly see the sea floor 18 metres below. Dropping down to the wreck you can dive along the deck and enter into the bridge. Since this wreck was cleared before sinking there are no snags to watch out for really. While this cannot really be called a penetration dive, it does allow divers to gain a bit of experience around wrecks with little fear of being enclosed. I would also like to recommend Scubatech diving.
Peter Gallagher, March 2017

The Santa Maria Caves comprise 10 caves on the north side of Comino. The caves are quite shallow and some are open above water. They feature plenty of sea life, including nudibranchs and moray eels.

"This dive is often done as a second dive after the P31. Again you drop off the boat into quite shallow water, frequently the guide will have brought bread to hand feed the shoals of sea bream that follow the divers. Feeling the tiny mouths trying to get the bread from your close fist is... a bit unique. The Caves themselves are a brilliant dive. Depths vary from 10 to 15 metres and on the route I was taken, there were several swim-throughs, where you went from the relative gloom of the overhead rock to pools of sunlight streaming down.
Peter Gallagher, March 2017

"Fantastic service offered by Dawn Diving. Would highly recommended this company. Their service is the highest ever service I have experienced as a diver. "
Colin Scott, UK, August 2016

"I would like to recommend Scubatech diving in L-Alka, San Pawl il-Baħar, Malta. Derek, the owner, is massively experienced having logged over 27,000 dives.
Peter Gallagher, 15 March 2017

"I'd like to add that Maltaqua is another dive operator that is very professional and the people are great!! I thoroughly enjoyed my time with them last year in October.
Lynette Maczuga, 13 July 2012

"U-Dive has two diving centres - one in St. Julians, the other - in Buggiba. Instructors speak in 5 languages."
Alina, Russia, 11 April 2014

"Accommodation at Diving into Malta is excellent and cheap."
Steve Naz

Please send us your comments on diving Malta and Gozo. Do you want to recommend a diving centre or dive site? Let us know. If you own a dive centre get yourself added.

The Wreck Site has more information about the various wrecks in Malta's waters.