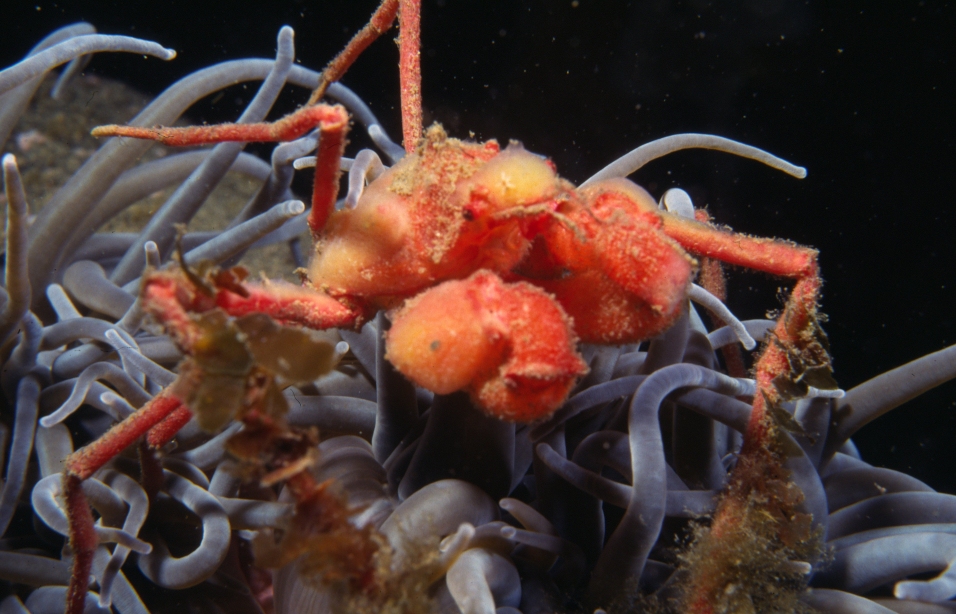 
Inachus dorsettensis lives from 4 to 300 m in the coastal waters of Europe, including around the British Isles and the Mediterranean. It has also been recorded in South Africa.

This small, triangular, crab disguises itself with tiny pieces of living sponge and seaweed. It sticks these among the hooked setae (bristles) on its back to camouflage itself against predators. The decorative material may also be used for food

The Scorpion spider crab likes to live in the tentacles of the snakelocks anemone, as our picture. The reason for this is probably again to evade its predators. Research on a similar species, I. phalangium, which also associates with an anemone, has found that the crabs can walk through the anemone without the anemone exhibiting any feeding reactions. The crabs left the anemones during night-time to feed, and when moulting. They do not always return to the same anemone but sometimes migrate to a different area.

Individuals appear to avoid each other.

As you can see in the photo,the crab's legs are very long and slender but the claws are rather big and sturdy. It is very like Leach's Spider Crab, but the carapace (upper shell) is not as pointed between the stalked eyes.

The scorpion spider crab grows to just 3 cm across.

Back to the UK Photo Gallery...
More photos of crabs...