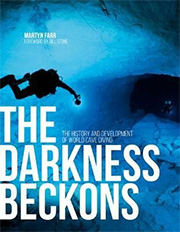 The definitive cave diving book since its first issue in 1980, author Martynn Farr has brought The Darkness Beckons bang up-to-date. He covers the earliest origins of cave diving right up to the most recent discoveries.

There are two types of cave diver, cavers who become divers and divers who become cavers. The earliest cave dives were mostly the former - "iron-willed individuals prepared to risk all".

Take Frenchman Norbert Casteret. In 1922 he plunged through sumps - flooded sections of caves - with little more equipment than candles wrapped in a swimming cap.

The first use of diving kit in a cave came much earlier though, in 1878. Again in France, M. Nello Ottonelli used deep sea diving kit to descend to a depth of 23 m in a resurgence (where an underground river surfaces). This was the globe helmet of old films to which air was pumped down.

Amazingly, the first use of SCUBA (self-contained underwater breathing apparatus) came as early as 1880 in a railway tunnel being built under a river in the UK. This was possibly the earliest rebreather, with not air but compressed oxygen on the diver's back. A man called Alexander Lambert dived 12 m down, walked 300 m in pitch black past obstacles and abandoned equipment, with no communication with the surface. He successfully accomplished his dangerous task of closing a heavy iron door and valves.

Cave diving exploration though took off in the 1940s and 50s, after Jaques Cousteau and Emile Gagnan invented the aqualung.

The expeditions and incidents in cave diving informed SCUBA developments and advanced knowledge throughout the sport.

I read this book whilst a short walk away from the Green Holes of Doolin, one of the few cave systems in Britain and Ireland entered from the sea. Being a caver I've met some of the people mentioned in the first third of the book which concentrates on the UK and Ireland. All of which helped to make this book a joy to read. 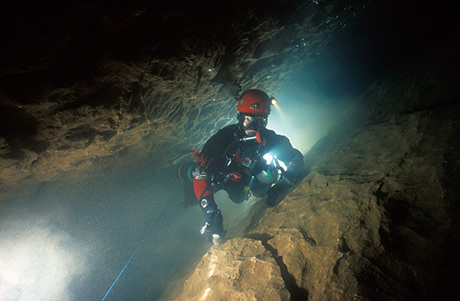 When the book progresses to the rest of the world there are many more instances of cave diving from the sea or rivers. In France, for example, at least 10000 dives are made each year just in the Lot area.

With warm water (22 o) and good visibility (30 m), Florida has well over 1500 cave-diving sites - a long way from some of the cold, tight caves described in the first third of the book. Cave divers in the US have often led the way in equipment, technique an approach.

Also incredibly beautiful are the Blue Holes of the Bahamas and the Cenotes of Mexico, shown in some fabulous photos. 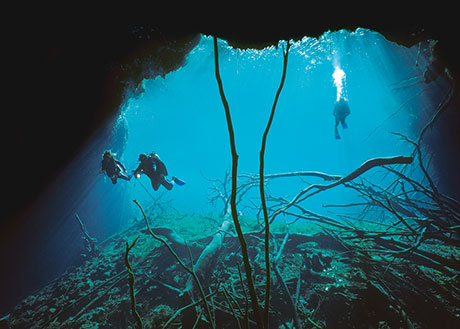 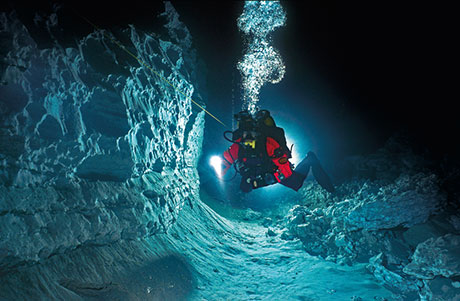 A Ordinskaya wintery environment - the longest underwater gypsum cave in the world which is in the Urals.

Who should buy this book?

You should buy this book if you have the slightest interest in diving in caves, technical diving or indeed caving itself. It has over 400 photographs and illustrations, including some awe-inspiring underwater ones plus those of beautifully decorated dry chambers.

Martyn Farr is an internationally renowned cave diver and has been part of teams discovering many miles of underground passage.

The Darkness Beckons is published by Vertebrate Publishing for Ł25, widely discounted on-line to Ł20.29.

Your Comments and Reviews