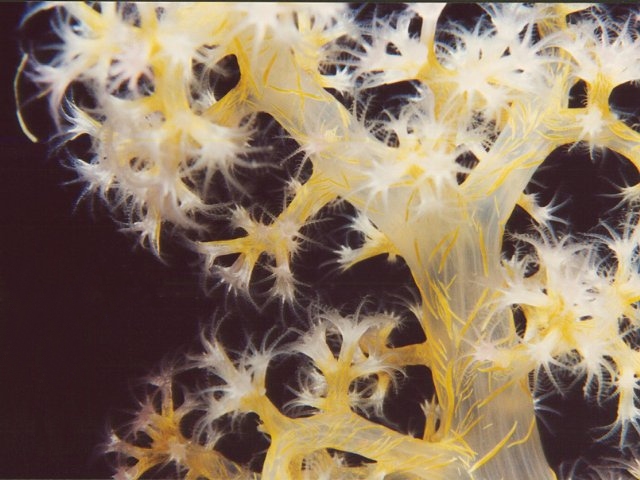 The body of this soft coral, Alcyonacea order, is stiffened with yellow spicules. Here the individual polyps are open, showing their 8 feathery tentacles (the 8 tentacles help to confirm identification). The soft corals help make the diving in the Red Sea is so beautiful.

A member of the Dendronephthya genus, these soft corals usually live below 10 m in areas with moderate or strong currents.

They can reproduce both sexually and asexually. A few days after full moon they spawn, when masses of eggs and sperm are released into the sea. New colonies can also be produced by budding.

According to the Encyclopedia of Life, Dendronephthya are among the most commonly traded soft corals. Between 1988 and 2002 at least 12,618 were sold globally (the U.S. was the largest importer, with 51% of the total Dendronephthya trade). However, corals in this genus are poor choices for aquarium hobbyists. They generally die within a few weeks, mainly because they lack photosynthetic algae symbionts (zooxanthellae) and must rely instead on filtering food particles and dissolved nutrients from the water.