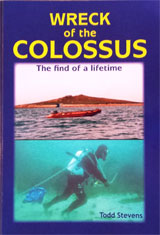 Todd Stevens is the author of Wreck of the Colossus, The find of a lifetime. The story of the discovery of a 200 year old historic shipwreck and its aftermath.

What prompted you to write the book?
I was living my dream and wanted to write about my experiences. Incorrect reporting within the media regarding the discovery of the wreck and its carving were also factors. There also seemed to be many misconceptions written about the Colossus and its history.

How long did it take you to write?
In total-6 years!! I first had to learn to write and then to use a computer. My first two years of one finger typing (about 100 pages) were lost when the computer crashed and the file was irretrievable. After starting again it took 4 years to complete.

What were the main lessons you learned from your experience with the Colossus?
Not to trust those in authority, archaeologists, the media, or anyone wanting to make a buck from diving and salvage.

Do you still get the same satisfaction from searching for wrecks?
Yes, since the Colossus I have discovered five new wrecks in my local area, one of which was protected by the government in 2005. Another I am working on at present has, due to the fantastic history behind it, prompted me to write a second book. (It will be out next spring hopefully)

What do you do when you are not working or diving?
Hunting for shipwrecks; writing; researching; I like walking and am also a keen snorkeler. I am also a trustee of my local museum and currently have a weekly show on local radio .

What would you say is the biggest change in diving since you started?
I suppose it would be the types of people the sport now attracts, there are no longer the swash buckling types around that there once were.

About the author
East London drop out heading nowhere; my brothers and I took up diving with the BSAC in Northampton in 1979 and the sport has kept me on the straight and narrow ever since. Carpenter by trade I was extremely active in the sport all around the British coast. I moved to the isles of Scilly in 1999 to hunt out undiscovered shipwrecks found the stern of Colossus in May of that same year. I lost the wreck to anyone who thought they had a vested interest in it, then wrote the book. Along with my wife Carmen (who is also a keen diver) I am now head of a small team that actively hunts for undiscovered historic wreck sites - there's usually treasure involved.

You can purchase Wreck of the Colossus by sending a cheque for Ł17 (including p&p) made out to Colossus Publications to Colossus, Pilot's Retreat, St Mary's, Isles of Scilly, TR21 0NA. Alternatively visit the web site at http://www.hmscolossus.co.uk/.