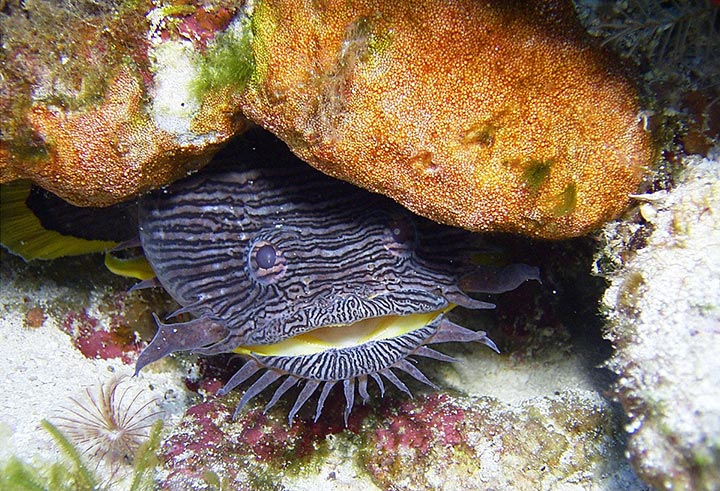 Photo by Anita Floyd, on Cozumel

Taken in Cozumel with a Sea and Sea DX3000, using a YS-90 slave strobe.
A diver coaxed this toadfish out from its den, and it swam approximately 100 yards before finally finding a suitable coral head to duck under.

Toadfish are found on the sand and mud bottoms of coastal waters worldwide. They usually have broad heads and drab colours, and look something like toads. The Splendid Toadfish, though, is different.

As you can see in the photo the Splendid Toadfish is attractively patterned in purple. Most of its fins are edged in yellow with the pelvic fin being entirely yellow. It also has a yellow mouth. 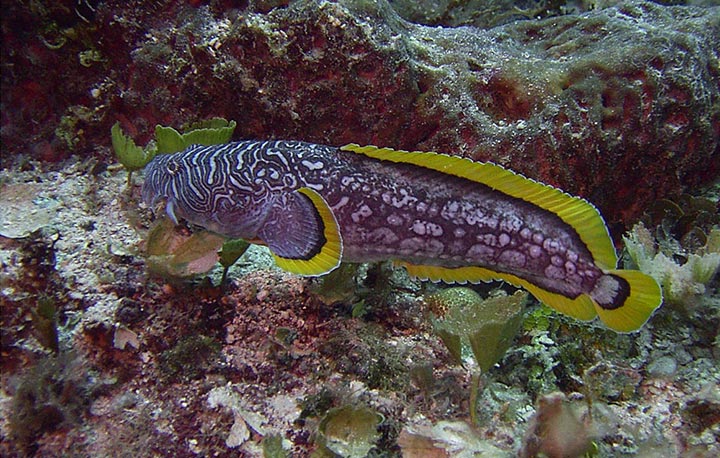 Also known as the Coral Toadfish, Sanopus splendidus generally lives on sand under crevices or coral heads in clear water, 10-25 m. It hunts at night, preying on small fishes, snails and polychaete worms.

The Splendid Toadfish was thought to be only found in Cozumel (Mexico) but sightings have also been reported in Belize. However, it is not widespread and is classified as vulnerable by the IUCN Red List of Threatened Species (www.iucnredlist.org). This means that although it is not Critically Endangered or Endangered it is facing a high risk of extinction in the wild in the medium-term future.


Back to the Americas room of the Photo Gallery...