Welcome to the 20th birthday issue of SCUBA News. We launched in May 2000 with an invitation to submit your favourite dive sites for inclusion in our top ten list. The top ten is still going and updated every year. This year, though, diving has mainly ceased: thank you for continuing to subscribe.

However, some countries are now easing their lockdowns. Which areas might soon be open? Well, the Nautilus liveaboard is planning to restart its Mexico trips in June, Bali plans to begin reopening in July, Greece hopes to start welcoming tourists by 1 July and the Bahamas are eyeing a possible opening date for commercial travel on or before 1 July. We'll update information about the opening of diving areas when more details become available.

Contents:
What's new at SCUBA Travel?
Creature of the Month: Red Sea Clownfish
Diving news from around the World
Download as a pdf file

The most common clownfish in the Red Sea, hence its name. But it doesn't just live in the Red Sea. You will also find it in the Gulf of Aden and in the Chagos Islands in the Pacific some 3364 km away. But curiously nowhere in between.

The Red Sea Clownfish lives from the shallows down to 30 m, generally in pairs in association with an anemeone. This is a classic example of symbiosis - where two different organisms live in close physical association to the advantage of both. The stinging tentacles of the anemone protect the clownfish from predators. The benefit to the anemone is probably down to the fish's swimming within its tentacles and wafting them around, thus increasing the water flow and hence the amount of oxygen available to the anemone. The anemone may also feed on the fish's waste material, plus the fish remove bits of debris from the anemone. There is also evidence that some clownfish species attack butterfly fish, which would otherwise eat the anemone.

Clownfish start off male, but if the female dies the dominant male will change into a female. The male-to-female sex-change occurs first in the fish's brain and only later involves the gonads - sometimes after a delay of months or even years.

The female pairs up with a single male, the largest of the males available, to mate for life. The fish spawn around the full moon and lay 500 to 1500 eggs on a patch of cleared rock near the anemone home. The parent often rubs the anemone causing the tentacle to extend, which in turn forms a protective canopy for the eggs of the fish. Light pollution, though, can have catastrophic effects on hatching rates resulting in no offspring being born.

The male cares for the eggs, driving away intruders. Even divers have been attacked if they get too close. He blows water over the eggs, giving them oxygen-rich water and preventing fungus from growing over them. After around a week the eggs hatch, usually soon after sunset. The larvae then drift in the current for more than a fortnight before seeking their own anemone. A recent study found that the larvae of a similar species, the Omani clownfish, regularly travelled 400 km - the longest distance scientists have been able to track the dispersal of any coral reef fish. 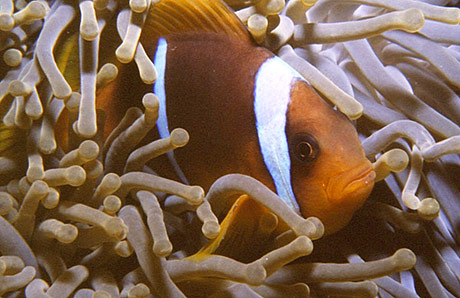 Larval clownfish can smell their hunters which helps them avoid being eaten as they search for an anemone in which to live. However in raised ocean acidity - which will happen if we fail to curb CO2 emissions - they lose their ability to smell predators. Other experiments have shown that they also lose the ability to smell their anemone hosts.

You can identify this clownfish from others as it has no white stripe at the base of its tail; the tail is orange and not black or white and of course by its location. Many have blackish backs but some are pure orange. They grow to 14 cm long. 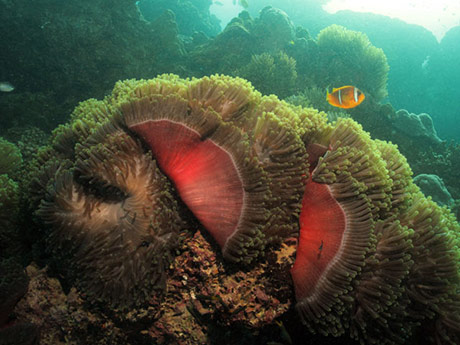 Our round up of the best underwater news stories of the past month. For breaking news see our Twitter page or RSS feed

SCUBA News is licensed under a Creative Commons Attribution 4.0 Unported License. This means we are happy for you to reuse our material for both commercial and non-commercial use as long as you: credit the name of the author, link back to the SCUBA Travel website and say if you have made any changes. Some of the photos though, might be copyright the photographer. If in doubt please get in touch.