Happy New Year and welcome to SCUBA News. We close the year with a guest article, with fantastic photos by Rick Rogers on the weird and wonderful life encountered when diving the Browning Pass.

AquaMarine Diving Bali
10% off published price, free rental gear and an AquaMarine Goodie-Bundle when you use code ScubaTravelUK2020 at
AquaMarineDiving.com

Contents:
What's new at SCUBA Travel?
Letters
The Weird and Wonderful Browning Pass
Diving news from around the World

Is dahab open as usual?! We usually stay at red Sea relax and love it..but have been told travel agencies aren't booking for sharm at the moment.
Lucy, UK

Dahab is open - but you will have difficulty getting there. Flights are not travelling to Sharm from the UK due to concerns about airport security. Also, the British Foreign Office have advised against travelling to Dahab (and elsewhere in the South Sinai apart from Sharm el Sheikh) so it will not be easy to get travel insurance.

You can fly to other airports - like Hurghada - and dive in a different area of Egypt. Or fly from another country to Sharm. (Germany, for example, have resumed flights.)

Any other replies, e-mail news@scubatravel.co.uk .

Colourful plunging walls, pinnacles, thrilling drift dives, abundant life, orcas, whales, and encounters with weird and wonderful animals. Every dive begins with all of the thrill of a treasure hunt. That is enough of a reason to return.

But there's a second reason. The more you dive it, the more you will see. Let me show you what I mean. 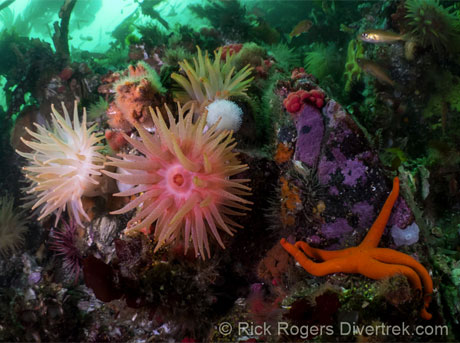 The Browning Pass was so full of life this year that it appeared to be moving at times. Massive schools of Puget Sound Rock fish, along with other juvenilles, were so thick in some spots that it caused me to lose sight of my dive buddy. And even ruined some photographs. Some divers even accidentally brought them back on board the boat when they became entrapped in their dive gear!

Based on last year's experience I decided to shoot close-focus-wide-angle with a fish eye lens, to help "cut through" the particulates. Using the highest equivalent exposures, and lightening the background also helped to minimize back scatter. 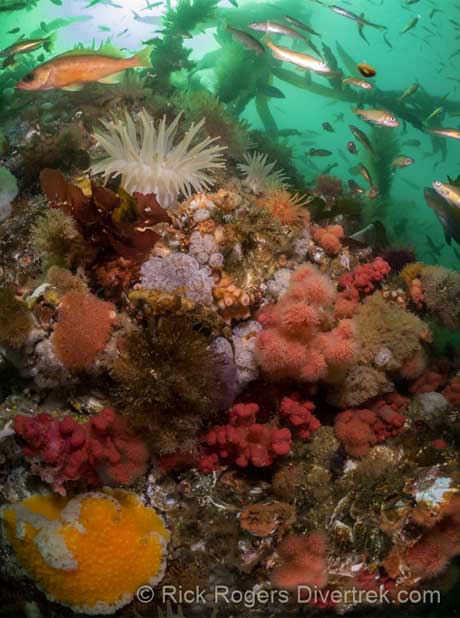 The Browning Wall, thick with life and colour. The currents that rip through here "force feed" it with nutrients. Note the large Orange Peel Nudibranch at lower left. Can you find the Sculpin staring me down? Give up? Top-third of photo at center. OMD EM1, 8 mm fisheye, Iso 640, f/8, 1/320 s.

Barry's Island is a good bet to see Stellar Sea Lions. Its walls are also loaded with colourful sponges, corals and anenomes. Unfortunately the visibility was poor when we arrived, at about 10 feet. Twice we were "buzzed" by a sea lion, but only for only a few seconds at a time. 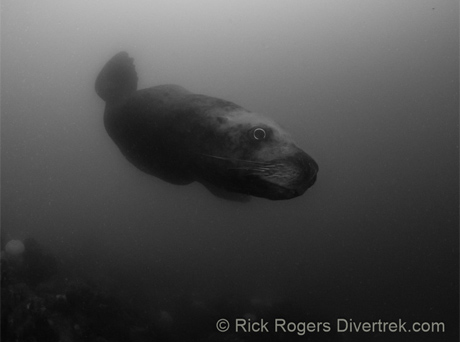 A curious female Stellar Sea Lion comes in for a closer look. I wish I could've spent more time with her.

Wolf Eels can make any dive a great dive. That's why Fantasy Island (actually a pinnacle) is one of my all time favourite dive sites here, or anywhere. At the base of the pinnacle in about 60-70' fsw you can reliably meet up with semi-tame Wolf eels, their heads poking out of their dens waiting for something crunchy to pass by. I can't think of any other fish that has such a distinctly human-like face, and paired with other qualities like intelligence and curiosity. Wolf Eels are really just an elongated fish (up to 8 feet in length) since they have pectoral fins behind their head just as fishes do. The Wolf part of their name comes from their belonging to the Wolffish family, possessing prominent wolf-like canines. Look for them hiding in rocky reefs, inside holes, caves or crevices. 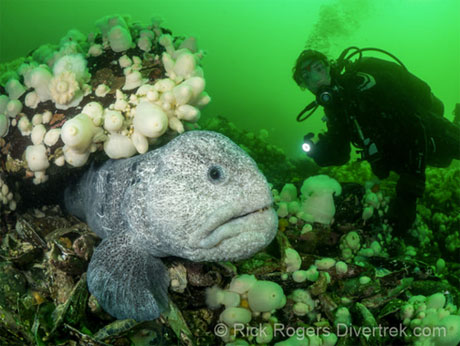 Note that the entrance to the den is littered with the shells from previous meals, perhaps even from an Octopus that may have previously occupied the den. Wolf Eels and Octopus niches overlap, which occasionally brings them into conflict. OMD Em1, Iso 500, f/8.0, 1/40s

It's best to have some goals of what you want to see when you dive here, so that you focus your diving, and know where to look. I had three main goals, to find these three eccentrics : a Decorated Warbonnet, a Mosshead, and a Grunt Sculpin. I got two of three checked off on this trip. Once you find one, you'll be able to find another with much less effort. This is what I meant by "the more you dive it, the more you'll see". 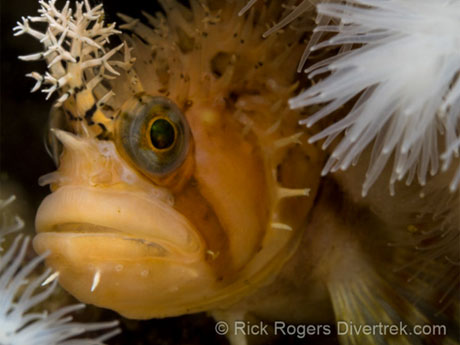 A Decorated Warbonnet on the Wall at Seven Tree Island dive site. It gets its name from the prominent cirri that you see on the head and gill cover which resembles an Indian chief's feather warbonnet. The cirri are thought to help it camouflage itself among other invertebrates, like the anenomes seen here. They're blandish coloured, but their cartoonish appeal more than makes up for it. OMDEm1, 60 mm macro lens, iso 200, f/16, 1/320s. 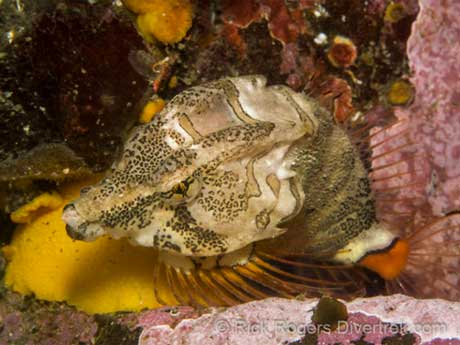 A Grunt Sculpin, or Northern Sea Horse at Lucan's Chute dive site. It looks like an unholy merging between a mouse, a fish and a barnacle (which it can mimic)! Many guidebooks said to look for them in old Barnacle casings. And I did- to frustration! But the only place I found them was in rocky areas, along horizontal ledges. They lack a swim bladder, and crawl along on their fins. But when startled, they can develop a good burst of speed with their tail! They can grow to 3.5 inches. OMDEm1, 60 mm macro lens, iso 200, f/16, 1/320s.

It's a slow day there if you only see one Humpback whale, sometimes within a hundred feet of you. On several occasions we also saw Orcas, and twice just before we jumped in the water. I couldn't tell if they were Transient Orcas (which feed on marine mammals) or a local pod (which feed on Salmon). Looking like a big black seal, however, in any case, I was reassured that Orcas avoid divers! 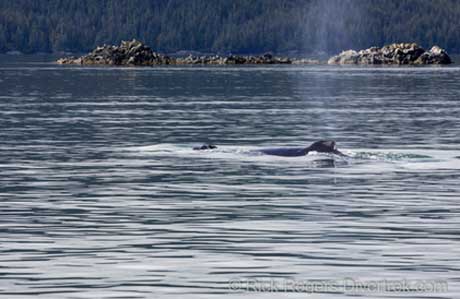 The Weird and Wonderful Macrolife of the Browning Pass

British Columbia, and the Browning Pass in particular, are well known for their macrolife. You'll find it listed as one the top ten macro destinations in the world. The reason for this is that the life there is continually "force fed" nutrient rich water from the currents, which spurs an explosion in the diversity and quantity of life. Macro photographers will be rewarded for taking the cold (50 deg. F), and putting up with some current. The wall this year was filled with tiny crabs of all types, but I noticed that the nudibranchs weren't as plentiful as last years'. Nudibranchs can be found at any dive site, but I had a lot of good luck at Hoody Nudi Bay, named in honour of the Hooded Nudibranchs that are found there. 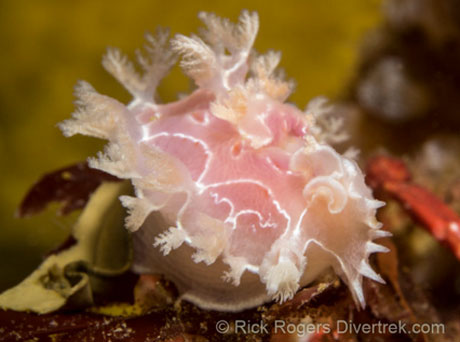 The Diamondback Nudibranch (Tritonia Festiva), was the most common nudibranch that I encountered. A pinkish hue, like here, shows the colour of its latest meal .

Who to dive with

We dove with God's Pocket Resort, now the only one operating in the area. It's not just the diving here, but the resort that makes it m favourite diving spot in the world.

Rick Rogers posts on Google+ as DiverTrek. You can read more of his work, and see more of his photos at the Diver Trek blog.

By day Rick Rogers teaches physics and science. When not teaching or diving, he swims, paddles and rides his bike in the beautiful Kawartha Lakes, Ontario, Canada.