Welcome to SCUBA News. Thank you very much everyone who gave their opinion on the new layout of our Web SCUBA News site - much appreciated.

AquaMarine Diving Bali
Get money off diving in Bali with code
ScubaTravelUK2020
AquaMarineDiving.com

Revealed: When and Where to Dive in Croatia

Croatia is a friendly country many small islands which are great for diving. The sea gets as warm as 24 oC. Find out more at
scubatravel.co.uk/europe/diving-croatia.html

Indonesia - What you Need to Know

What you need to know before your trip to Indonesia - tipping, weather, children, visa, currency, local travel agents...
scubatravel.co.uk/indonesia/

The Maltese archipelago lies at the centre of the Mediterranean, 93 km south of Sicily and 288 km north of Africa. It comprises three islands: Malta, Gozo and Comino. With clear waters and rocky scenery the islands are very good for diving. Indeed, two of the archipelago's dive sites are in the top dives in Europe list: namely the Blue Hole in Gozo and Cirkewwa in Malta.
scubatravel.co.uk/europe/malta-dive-in.html

The Great barracuda, Sphyraena barracuda, is a fast and deadly predator found across the globe. 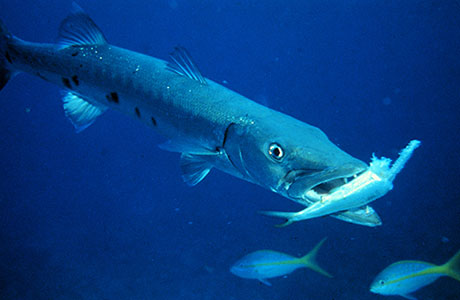 Mostly found living on near-shore coral reefs in tropical and sub-tropical waters, excluding the East Pacific, the Great barracuda lives quite close to the surface of the water. It has however been known to take they occasional foray into open water and has been observed as deep as 100 meters. They can grow up to 2 metres in length and the largest know weight was approximately 45kg, which mean predators are in short supply. However, sharks, goliath groupers and even tuna have been known to feed on the smaller adults. 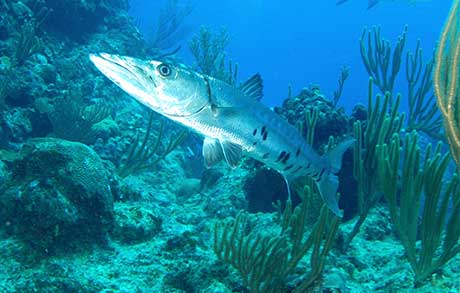 The juvenile Great barracudas start life in amongst mangroves, sea grass and murky inshore waters as they are particularly susceptible to predation when they are small and young, but after about a year they are mature enough to move to the coral reefs where they will live to an age of between 14-19 years. Whilst the global distribution of the great barracuda is currently considered one species, they can be divided into four populations, found in the Indo pacific, Hawaiian Islands, west Atlantic/Caribbean and the east Atlantic. 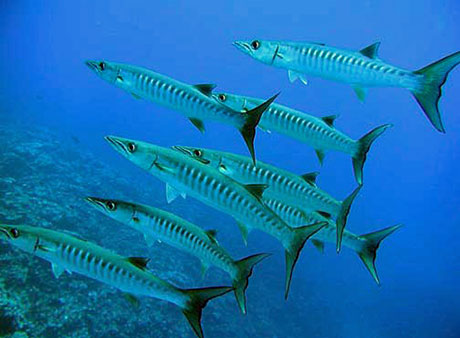 The Great barracuda is amongst the top predators in their environment and use very highly developed smell and vision senses to locate their prey. When attacking, the barracuda will charge at fast speed (approximately 12 ms-1) and ram their target. They then unleash the power of their jaws which allows them to slice through their prey, even those larger than the barracuda itself. The jaw of the barracuda is formed in such a way that the upper and lower jaws form 'rows' of teeth. The top jaw has smaller serrated teeth on the outside and larger canines on the inside, and the teeth of the lower jaw fit between them when the mouth is shut. When the jaw closes this acts like scissors and slices through prey with ease. 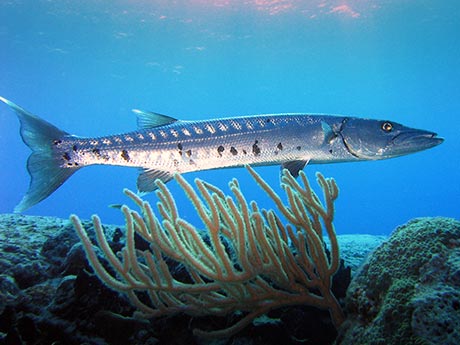 The Great barracuda also has the infamy of containing high levels of ciguatoxin. Their toxic levels are traced back to dinoflagellates, which are a type of marine plankton that are at the bottom of the food web and are more commonly known for causing algal blooms. As those who prey upon them are also preyed upon, their concentration levels build up until they reach dangerously high levels amongst the apex predators, like the Great barracuda.

Ciguatera poisoning can be very harmful to humans when the flesh of reef fish, with high levels of the toxin, is eaten. It is thought to cause over 100 gastrointestinal and neurological symptoms.

by Steven Rogers, a 3rd year student of Marine Biology at the University of Aberdeen. He can be found discussing science and football on Google+, Tumblr at marinebiolove and Twitter at @CabinBoy365. Check out his blog marinebiologyblog.com.

In one of the Red Sea safaris we stopped in a small bay near Wadi Abu Dabbab, north of Marsa Alam. The bay was quite ugly as a dive site - a relatively small sandy patch maybe 100 meters2 devoid of coral reefs or almost anything, covered with sea grass and a lot of junk.

Because the charm of this sandy bay is the green turtle population that reside there, living in company of some pretty honeycomb sting rays (and rumours have it there are dugongs living there too, but I can't confirm).

So, into the water we went, and not more than few minutes into the dive we see a huge rock covered with large remoras. Then the rock majestically starts moving, looks at us and goes on its business of munching grass. By Neptune, these turtles are big! 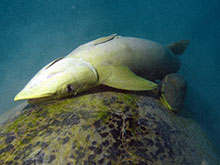 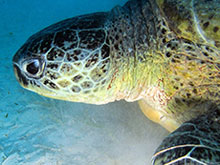 I can't estimate how many turtles live there, we met something like a half a dozen different ones. 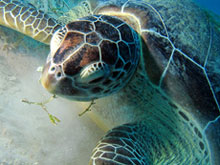 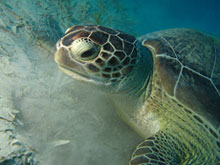 A pity they are endangered.

Read more on the diving at Abu Dabab and Marsa Alam.

If you have a diving story to share we'd love to hear it - e-mail news@scubatravel.co.uk.

Researchers have found parabens in the tissues of all the marine mammals tested - including dolphins, sea otters and polar bears. Parabens and their byproducts can act like oestrogen in animals.

US state to phase out use of tiny plastic beads found in soap, toothpaste and body washes by 2020, in bid to protect fish and other marine life

Removal of large predators through fishing also harms the populations of smaller fish.

Florida wildlife officials say there have been a record number of green sea turtle nests around the state this year.

New book covers various configurations, sidemount systems, how to choose what works best for you, the skills necessary to learn and sidemount, popular methods and modifications along with photos.

The blue whale is the largest creature on Earth and perhaps the biggest that ever lived, so it is no surprise it has a huge appetite. But the strategies this behemoth uses to get enough food has not been well understood - until now. Marine mammals are not indiscriminate grazers as long thought.Instead, they feed more intensely when krill density is high but avoid doing so when there is less krill in order to save oxygen for future dives.

Undersea robot learns to ferret out the unusual and interesting

MOST of the ocean is empty, but it's also home to sharks, shipwrecks and strange undersea creatures. How's a robot to find the good stuff? Yogesh Girdhar of the Woods Hole Oceanographic Institution in Massachusetts is giving bots a sense of curiosity. He wants them to be able to filter out common features and focus on the remarkable.

The first global digital map of the ocean floor sediments shows we have little clue about how the world's biggest carbon sink works.