Welcome to SCUBA News. This month, instead of the Creature of the Month, we've an article about how robots are killing millions of jellyfish in Korea. Is this a reasonable solution to jellyfish swarms? Let us know.

For Diving Travel Insurance with diving down to 50 m, go to World Nomads, the adventure travel specialists

Diving Dahab in the Red Sea

We've combined all our information about diving in Dahab - dive sites, dive centres, where to stay, etc - into one page, and added some new stuff. What do you think - is it easier to use or would it be better split up into different pages? E-mail news@scubatravel.co.uk.
https://www.scubatravel.co.uk/redsea/dahabdive.html

Where to Dive in Greece?

According to the votes for the best dive sites in the world, the top rated diving area in Greece is Chios Island featuring caves, tunnels, walls and wrecks. Elsewhere in Greece diving highlights include the wreck of the Britannic. This sister ship to the Titanic lies off Tzia (Kea) Island at 120 m, so is only for technical divers. Read more on the diving in Greece at
https://www.scubatravel.co.uk/europe/greece-diving.html

Comparing Dive Shops in the Philippines

The Philippines is not only famous for its marine life, but also for wreck diving. More Philippines dive shops, with divers' ratings and reviews are now at
https://www.scubatravel.co.uk/philippines/diving-philippines.html

Enormous smacks of jellyfish are increasingly causing problems. In Korea, the number of accidents and financial losses caused by jellyfish is estimated at 300 billion won (Ł1.8 m) per year. To combat the jellyfish, Korean researchers are using a team of robots, called JEROS (Jellyfish Elimination Robotic Swarm). These slash and grind the jellyfish, killing 900 kg an hour! 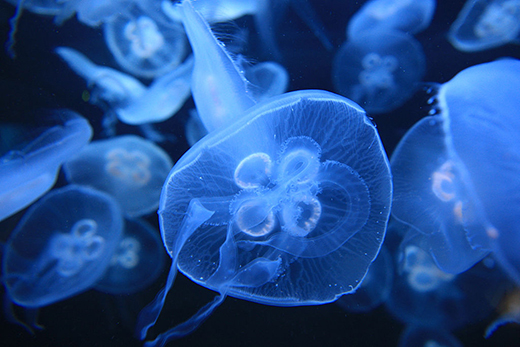 Jellyfish cause the fishing industry to lose money by breaking fishing nets. They sting swimmers. They block the seawater cooling systems of power plants. A Japanese trawler has even capsized after the three man crew tried to haul up a net loaded with jellyfish.

Scientists have proposed several reasons why jellyfish blooms are apparently becoming more common around the world's coasts. One recent suggestion is that "ocean sprawl" may be an important driver of the global increase in jellyfish blooms. Ocean sprawl is the proliferation of artificial structures associated with shipping, aquaculture, other coastal industries and coastal protection. The theory is that the structures provide habitat for jellyfish polyps thus causing the increase in jellies. Another theory is over-fishing of predators like turtles has caused numbers to rise. A further contributing factor may be polluted waters – where fertiliser run-off and such like causes plankton blooms off which the jellyfish feed.

In recent years, droughts and dams have restricted the amount of freshwater that has been entering the oceans. Jellyfish prefer to live in waters with higher saline contents. Saltier waters are typically denser and fall below layers with a lower saline content. When the freshwater deposits have not been enough to dilute the waters near the coast, jellyfish are able to approach the shore. In addition to allowing a closer proximity to shore, these droughts and dams allow the increase of iodine in the water (it is found in saltier waters). Many jellyfish need this to transition from polyp form to medusas.

Will robots exterminating jellyfish solve any jellyfish problems? What happens to the jellyfish parts that have been cut up?

The majority of theories for the increase in jellyfish feature man-made problems. Reducing the underlying cause of the jellyfish blooms is surely more of a solution than destroying the animals and producing billions of jellyfish bits.

Further Reading
Killer Robots Slash Jellyfish
Is global ocean sprawl a cause of jellyfish blooms? Carlos M Duartee et al Frontiers in Ecology and the Environment 2013 11:2, 91-97
Jellyfish Blooms and Their Effects in the Sea of Japan

Help Scientists Classify Plankton, from the comfort of your Computer

Volunteers are needed to classify millions of underwater images to study plankton diversity, distribution and behavior in the open ocean. Do it easily from your computer by dragging measurement lines and matching the shape.

Marine conservationists have launched a smartphone app in the hope of discovering new information about some of the ocean's most mysterious and threatened animals - seahorses - and paving the way for similar efforts with other difficult-to-study species.

An independent scientific review panel has concluded that the mass stranding of approximately 100 melon-headed whales in the Loza Lagoon system in northwest Madagascar in 2008 was primarily triggered by acoustic stimuli, more specifically, a multi-beam echosounder system operated by a survey vessel contracted by ExxonMobil Exploration and Production Limited.

Reefs are among Earth's most vibrant ecosystems, yet they flourish in waters lacking nutrients - a phenomenon known as Darwin's Paradox. A team found that sponges keep the reef alive - by recycling vast amounts of organic matter to feed snails, crabs and other creatures.

The new government of Norway has committed to protecting valuable areas of the ocean from being impacted by petroleum activities, putting the value of nature in front of the need for oil.

Where shark numbers are reduced due to commercial fishing, there is also a decrease in the herbivorous fishes which play a key role in promoting reef health.