Reef Fishes of Oman is available as an iPhone app or as a Kindle book. 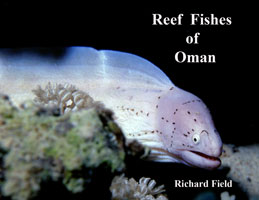 For marine-life lovers the diving in Oman sounds irresistible, with huge schools of fish and as many as 1500 different species. This photographic identification guide doesn't attempt to cover all 1500, but features 385 of those you are most likely to see.

The book starts with a description of the three seas bordering Oman: the Arabian Gulf to the North (known as the Persian Gulf in many countries), the Gulf of Oman to the East and the Arabian Sea to the south. I would have liked a map to be included to more easily visualise the area. The useful introduction tells you where you can see the highest diversity of fish, and recommends various diving areas. Some technical details follow on the naming and biology of fish. Then comes the meat of the book - the photos and descriptions of the fishes.

Thoughtfully written, the guide is very good at pointing out subtle differences between species which at first glance appear identical. It also adds habitat information. Where a juvenile fish looks different to the adult, the author includes a photo of the fish in its early and late stages. He takes great pains to get the juvenile shot, going so far as to rear an unidentified young fish in his aquarium so that he can observe its development, until it reaches a recognisable adult stage.

When a fish is similar to its Red Sea counterpart, this is made clear. The Two-tone Chromis of Oman (Chromis fieldi), for example, is a different species to the Twotone Chromis of the Red Sea (C. dimidiata), but extremely similar in appearance. Indeed, the Omani species was only scientifically recognised this year (by Randall and diBattista). Was the fish named after the author, Richard Field?

The book is arranged, like others of the genre, into families of fishes: stingrays, moray eels (lots of them), groupers etc. 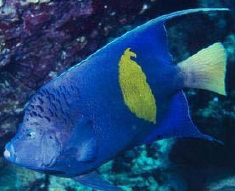 I especially liked the sometimes quirky descriptions - the splodge of the Yellowbar angelfish resembles "a country map" and a parrotfish is "buck toothed". I also love the fact that the author has included a species of Torpedo ray for which he has no name. Indeed he states that it might be as yet undescribed. And this isn't the only one, there is also an as yet scientifically un-named stingray and moray eel pictured and commented upon.

The author not only provides unambiguous identification notes, but also very interesting comments on behaviour and lifestyle. The Rockmover Wrasse "searches for prey, usually in pairs, on sandy substrates, by pushing over rubble and debris to reveal the crabs and molluscs that they feed on. They are usually accompanied by opportunist goatfish. The young appear to imitate floating algae."

Some photos look a little murky, due apparently to the waters of southern Oman being very "green", but they are clear enough for identification purposes. The majority of the photos are of the fish in their natural habitat, giving an accurate representation of what you might see.

Where reference books are concerned, I have always preferred a hard copy to a digitised version. This one, though, has removed many of my predjuces. You can download the pdf book to an iPad, iPhone, Laptop or Android. It is also readable on a Kindle. Additionally I tried it on a Blackberry playbook - but was unable to read it on that device.

Richard Field packs exactly what you need to know to identify a species into just a few entertaining sentences.

I can thoroughly recommend this book. I enjoyed the author's style of writing and his keenly observed remarks.

Richard Field's interest in marine life started when he worked for the Eastern Telegraph Company in Port Sudan in the 1960’s. He spent his leisure hours free diving and spear fishing. Inspired by Hans Hass's book Under the Red Sea, Richard bought a camera for Ł10 and designed and built an underwater camera housing using surplus telegraphic equipment.

The author subsequently worked in Hong Kong and Saudi Arabia. In 1998, together with his wife Mary, he wrote his first book Reef Fishes of the Red Sea. He is a regular contributor of photographs to Fish Base and to ARKive.

Reef Fishes of Oman is available from Amazon.