The glorious oceanic whitetip sharks spend a lot of time in shallow water, tend to swim slowly and are very curious. All of these mean that divers can get superb closeup view of them.

They are easy to distinguish from the reef whitetip by their more substantial bodies, the pilot fish that continually accompany them and their rounded fins. A beautiful and awe-inspiring shark.

If you should see an oceanic whitetip, keep calm, keep facing it and move very slowly. Treat it with respect as it can be dangerous.

Oceanic whitetips used to be the most common pelagic shark in the sea, but now they are critically endangered. The best places to encounter them are at Elphinstone reef in the Red Sea, and Cat island in the Bahamas. 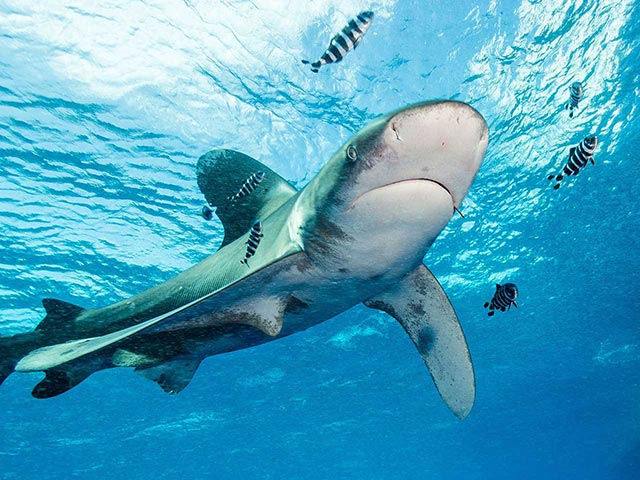 Why is it critically endangered and how many did there used to be?

The reason it is now critically endangered and threatened with extinction is mostly due to fishing. In some areas it is deliberately targeted plus it is often caught as bycatch and retained for the meat and fins. The fins especially are highly prized in some markets like Hong Kong, being large and thought of as good quality. The same reasons that it encounters divers means that it is very catchable. Their numbers have declined terribly throughout its range. Scientists estimate that the population of oceanic whitetips has declined by over 98% since the 1960's.

Compounding its problems is its slow replenishment of numbers. It's thought female sharks reproduce just every other year and pregnancy lasts 10 to 12 months. Smaller females might have just one pup, although large sharks might have as many as fourteen. But the sharks are getting smaller. Female sharks don't mature until between 6 and 8 years old and only live until around 18. They give birth to live young. The average population increase per year in the Atlantic - the r number we are now all so familiar with - is just 0.126 a year. 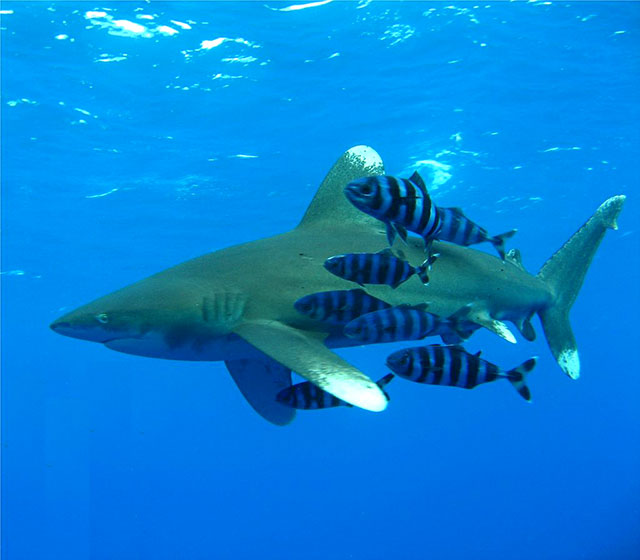 There is hope for the shark though. This year the UN countries agreed to list Carcharhinus longimanus on Appendix 1 of the Conservation of Migratory Species of Wild Animals (CMS). This is the highest level of protection possible.

This large shark grows to 3.5 m long, but individuals this large are rare. It roams throughout the tropical and temperate seas, however, it seems to prefer waters above 21 oC. Although mostly keeping to shallow waters, it has been known to dive to depths of over 1000 m. They travel great distances in open ocean - one was tracked as far as 6500 km over 100 days. However, they also appear to regularly return to favourite areas. Sharks tagged in the Bahamas stayed within 500 km of the tagging site for around a month before moving to several different destinations across the western North Atlantic. After five months they were back.

Read more Creatures of the Month.