Dugong, Lady of the Sea 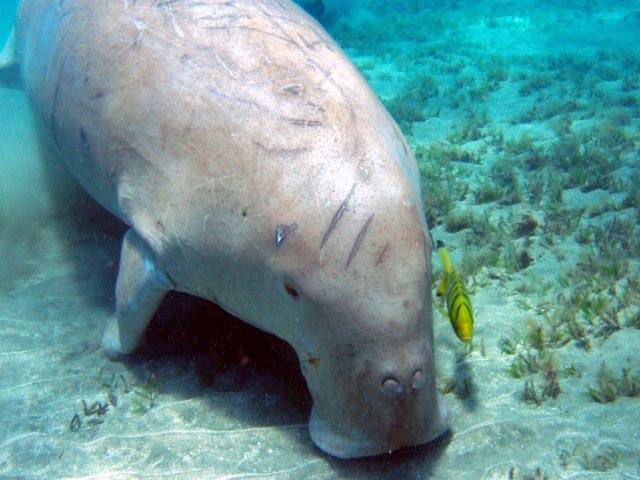 Where can you dive with Dugongs?

Being a slow swimmer, you'll find dugongs in sheltered lagoons and bays in warm water in the Indian and western Pacific Oceans, such as are found in the Red Sea, East Africa, the Philippines and Australia. In total they live in 48 countries, but in many places they are close to extinction.

In Egypt, you may see dugongs at the lagoon of Abu Dabbab, Marsa Alam. In the Philippines there is diving with dugongs along the Busuanga coast of Palawan. Australia has large populations of dugongs at Shark Bay and Ningaloo Reef on the west coast. In Mozambique they live in the protected area of Bazaruto. Bangka island in Indonesia is another place where you could encounter these peaceful animals. Plus Kokopo in Papua New Guinea.

Keep a safe distance from the animals, around 4 m, and don't touch them. Move slowly and the dugongs will keep eating the seagrass and let you take photos.

The life of the Dugong

Named from the Malay for "Lady of the Sea", Dugongs are said to have inspired the legends of mermaids.

They feed in the seagrass beds of the Indo-Pacific and are the only herbivorous, truly marine mammal. (The related manatee spends some of its life in fresh water.)

Adult dugongs can grow to over 3.5 m (11 ft), and may weigh over 900 kg (2000 lb). Male dugongs begin to grow tusks between the ages of 12 and 15 years. If food is plentiful, the habitat protected, and predation low, dugongs may live more than 70 years. (The oldest dugong who has been examined for age was estimated to 73 years old.) 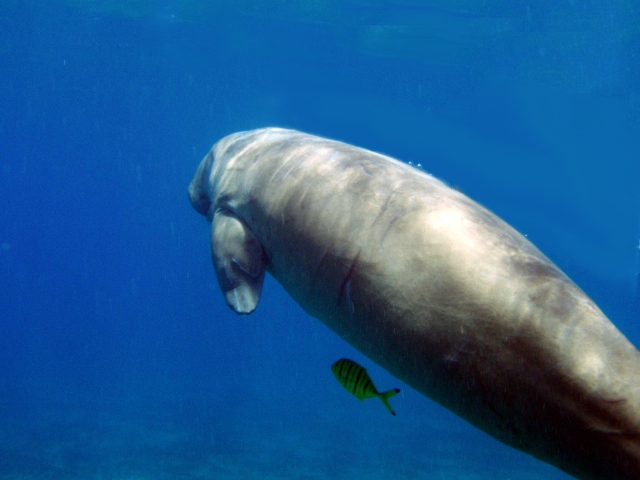 They can eat as much as 40 kg (88 lb) of seagrass a day, leaving distinctive troughs in seagrass meadows.

Why aren't there more of them?

Dugongs are natural prey for sharks, killer whales and crocodiles, but they are most vulnerable to human activities. Hunting has drastically reduced dugong populations in some areas and dugong habitat is under pressure from coastal development, pollution, trawling, gill nets and other degradation. They are listed as Vulnerable on the IUCN Red List of Threatened Species.

Part of the problem for Dugongs is their longevity and their slow rate of reproduction. They have only one calf at a time and nurse their baby for a year and a half. The young dugong might stay with the mother until she gives birth again, which can be as much as seven years later. Even in the best of conditions populations might only increase by 5% per year. When dugongs do not have enough seagrass to eat they delay breeding. 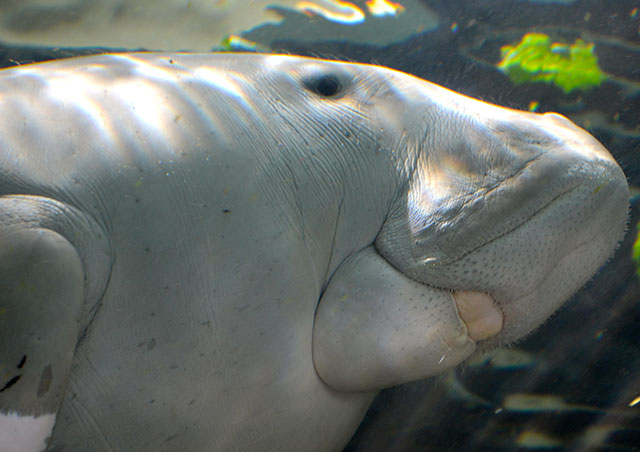 Face of the Dugong

Dugongs have dense, massive bones, which help to keep them submerged. Their lungs lie along their back and act like floats, keeping them horizontal in the water.

Dugongs are thought to use the "lek system" whereby males establish and defend courtship territories in traditional areas where females come only to mate.

They are the only representatives left in their family Dugongidae.

They are tough to find, but they are there!! Got lucky also seeing few on the dive, but thats a rare one. They are very shy there.