With a business trip to Singapore looming and no holiday organised for the Red Sea this winter, I looked for an extension to the Singapore trip to get in some good diving.

I first tried some UK dive tour operators to see if a stop-over in Singapore could be organised but the flights were not available. Then it was onto the web for a local operator to book a tour out of Singapore. I found several but selected Waikiki Divers because they seemed to have flexible tour lengths and times. A quick email followed by a phone call put me in touch with Stella Lee from Waikiki who was able to create a six day, five night trip to Sipadan on the day required, and returning in time for the flight back to Manchester.

From Singapore it was a 9:30 am taxi to the Senai airport across the border in Malaysia, a flight to Kotu Kinabalu, followed by another to Tawau, and then a one hour minibus ride to get within one last leg of the destination. A one night stay at the very spacious and quite luxurious Seaquest Hotel in Semporna was the break in the journey.

The following morning at 8:30 am we were met by the mini-bus which transferred us the short distance to the jetty where Palau Sipadan resort tours have their shore base. A 1 hour speedboat ride was the final staqe to get to Kapali where the accommodation is in wooden chalets connected by wooden walkways built over a submerged reef, with a small very white beach uncovered at low tide. No one has been able to stay on Sipadan itself since 1/1/2005, apart from some soldiers whose job is to prevent divers who land there for their surface interval, from wandering off down the beach or into the inerior of the island.

Our group comprised one from England, an American, a Canadian, a Turkish couple and a Japanese, so plenty of opportunity for swapping notes on world diving.

The check out dive followed later in the morning and was a dive from the jetty at the dive centre. Basically a sandy bottom with coral blocks and quite a variety of small fish. In the afternoon a short boat ride to sweet-lips table led to a similar dive but with somewhat bigger fish (sting rays, large jacks) giant mantis shrimps and a very large turtle. Most evenings the dive centre organised a dusk dive for those with the energy left. Some considerable time was spent trying to get photgraphs of a shy mandarin fish. 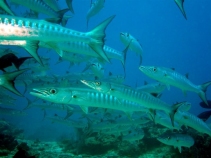 The next day we took the boat to Sipadan (about half an hour away with 300-400 horsepower behind us). In the morning we dived at the coral garden area, and after a break went to the South Point. Here the life was what you might expect from one of the top dive sites in the world. I counted 11 white tip reef sharks resting on the bottom, was passed by a six foot tiger shark going the other way, one Napolean wrasse, too many turtles to count and an octopus in the shallows at the end of the dive.

For variety we also went to Mabul Island where we dived in the junk underneath the SeaVentures rig. Here were plenty of exotic small creatures (nudibranchs, frog fish etc) but too much man-made rubbish for my liking.

Further dives at Sipadan saw similar numbers of macro creatures, including a large shoal of barracuda forming the traditional swirling cylinder, and again an unlimited selection of turtles.

We were extremely well looked after by the staff at Kapalai, the food was good, the weather warm but really quite windy (which keeps the huts cool at least).

Trip of a Lifetime

The trip was well organised, everything went just like clockwork but was very relaxed at the same time. So if you get as far as Singapore I stringly recommend you contact Stella at Waikiki Divers and let them organise the trip of a lifetime for you.

For other dive operators going to Sipadan see our Malaysia Diver Operators page. For the diving around Sipadan see the dive sites page.

A divers' guide to Underwater Malaysia Macrolife
by Andrea and Antonella Ferrari, Paperback, Nautilus Publishing, 462 pages, 2004
More details and 20% off at Amazon.co.uk
32% off at Amazon.com