20 January 2020
Madagascar, the world's fourth largest island, hosts one of the world's longest continuous coral reefs1. The country is famous for her unique land animals, but her seas are also full of life not found anywhere else. And she doesn't just have endemic species: around the Madagascar coast are found at least 34 types of whale and dolphin, 5 types of turtle, 56 types of shark, 300 hard corals and 1300 species of bony fish 2.

Madagascar is in the Indian Ocean, off the coast of Mozambique. The cyclone season normally runs from January to March at which time most of the dive centres are closed. The best time to go is between May and December, when the visibility can be 30 m or more. High season is in July and August, which are also the coolest months. Average open water sea temperature ranges from 28 oC in January to March, to 23 oC in July and August.3 In the north, though, the water temperature never gets lower than 26 oC in Winter and the average temperature is 28-29 oC for the rest of the months.

Visas are required for entry to Madagascar. 30-day tourist visas may be obtained at the airport on arrival. If obtaining a visa at the airport, you should ensure that an entry stamp is recorded in your passport.

There has been political unrest in Madagascar since 2009, when there was a coup. Take care when travelling. The British Foreign and Commonwealth Office provides up-to-date travel advice. It's recommended to take out comprehensive travel and diving insurance before going to Madagascar.

Some good diving in Madagascar is around Noisy Be, but for the best dives take a liveaboard to the Mitsio (north of Noisy Be) or Radames (west of Noisy Be) archipelagoes. The east coast of Madagascar - eg Saint Marie - is on migratory routes for humpback whales (Megaptera novaeangliae) between July and September. Indeed, they are said to give birth there during this time. Whale sharks are frequent in October and November at Nosy Be.

Around Nosy Be the diving generally takes place in the morning as the wind becomes stronger in the afternoon. Tanikely is a marine park with exceptional marine life.

"Second only to Mozambique. We dived at end of rainy season (end April) so it'll be even better from May onward"
Lee Donoher, 2012

"We did more than 10 different dive sites around Nosy Be. Great variety or coral reefs, interesting marine life and HUGE schools of fish. All dives except Tanikely are pretty deep (20+m) so sufficient surface time is a must. One day had very strong current and 2 dives of the day were more of "hold to something and see what you can". "
Mari Seppä, 22 September 2014

"Coral in amazing condition, especially the HUGE fans, turtle, massive lobsters, too many species of fish to list."
Lee Donoher, 8 May 2012 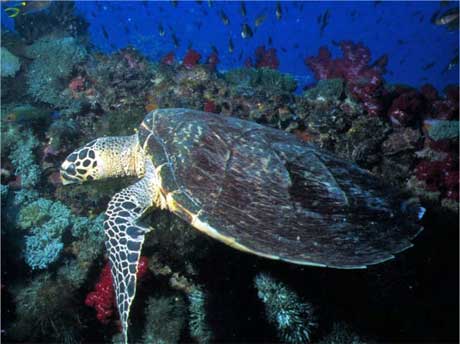 "The wreck is pretty deep (20-28m), but the amount of life around it is amazing. I have not seen that many scorpionfish in one location ever before. Enough to see for 2 consecutive dives if interested."
Mari Seppä, 22 September 2014

Recommend a dive operator or list your diving company on this page.

The Gros Plan catamaran caters for 8 guests in 4 double cabins. Each cabin has its own en-suite bathroom. 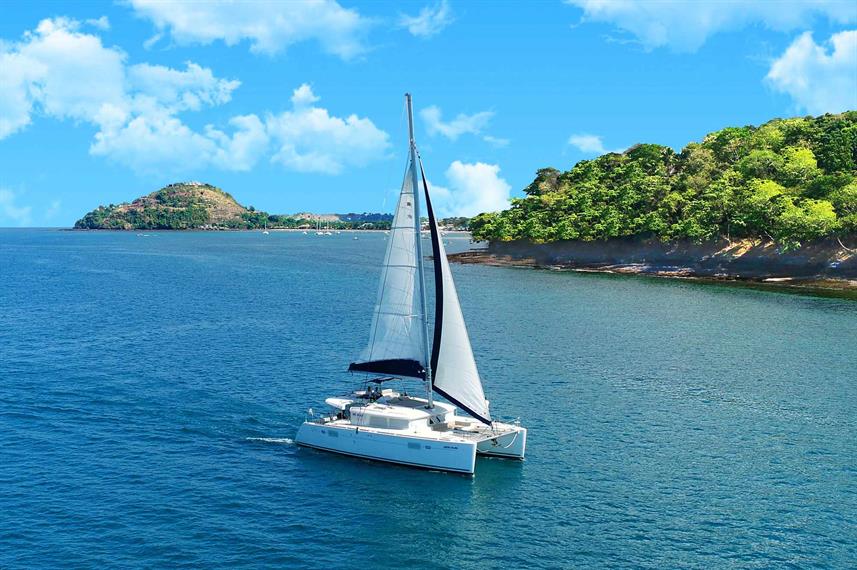 Depart from Nosy Be and explore either the southern Radames archipelago or the northern Mitsio islands. Divers regularly encounter schools of barracuda, jacks, whitetip reef sharks and hammerhead sharks at Radama. The Mitsio Archipelago is idea for spotting large schools of fish, plus manta rays and whale sharks. Humpback whales also sometimes pass by.

The Oceanes Dream catamaran caters for just 8 guests in 4 double cabins. Each cabin has its own en-suite bathroom and double bed, offering a little luxury whilst exploring the best dive sites of Madagascar. 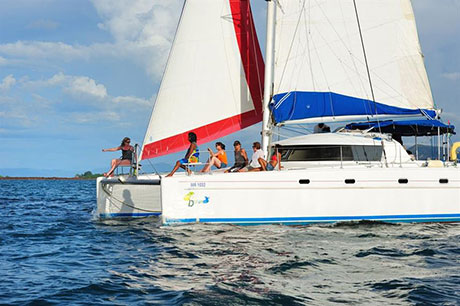 Oceanes Dream safaris depart from Nosy Be and explore the pristine islands of the Radama Archipelago and the Mitsio Archipelago.

If there was an option to give less than one star I would. First of all I booked a trip with Oceans Dream through Liveaboard.com 8 month before the trip. I planned my whole stay in Madagascar (and Africa) around this 6 day trip. When I arrived in the dive store, the owner Eric said without much empathy that the trip is cancelled as a cyclone was about to arrive. I couldn’t believe what I heard. Natural disasters happen, but not letting the customers know beforehand made me so incredibly angry because I could have changed the plans around without needing to come up to Nosy Be. This was just the start...what came after was something I never encountered in any countries I’ve been to and I travelled all continents...
The dive centre just didn’t get that me (and another 3 victims) were the vulnerable part here having paid €1300 and not getting a service. First they offered a full refund then they were only willing to refund their part without the commission to liveaboard.com. (Just above €900)
The 3 other ‘cyclone victims’ went for this option, I asked if I could go onto the same trip the week after and there was no problem with it. I just wish I asked for the refund instead...
First of all on my original rental list I asked for a torch, and Maud (who assisted us with the refund process but with an incredible attitude) said, sorry we are out of torches.
Me: "but I put this down on my renting wish list months ago"
Her: "sorry we don’t have anymore. Every diver should travel with a dive torch anyway..." wow really?
And what blew my mind completely was that when I arrived to the briefing about the whole trip in the dive shop, the new group was already there - A French group of friends, 5 people- and with that little French that I understand Maud was talking to them about me being a ‘princess’ and briefed them in about what a ‘pain in the ass’ I was wanting a refund for my previous trip. As you all can imagine this set me off well with the group, and for the next 6 days I was like air on that boat. They spoke in French ONLY not making any effort with me. Maud did all the briefing in French and as a Cruise Director her job would have been to involve me equally in the group and she almost did the opposite. She also told me that she studied behaviour analysis, so somehow this situation has become all my fault.
On the very first dive she chose a site where the current was incredibly strong.
She said that we were going to go down with the fast release - I said I needed to take it slow on the first time because usually I have problems equalising - she said well I have to come down fast because there is a current. On the briefing she said first we will swim in the direction of the current and as we went down we swam for about 10 minutes against the current, I finished my air within 30 minutes and when I told her I had 50 bars left she didn’t want to come up with me and asked me to come down to the bottom (I get that, the current is not as strong there but I was at 50 bar without having done any safety stop after having been at 35m ?!)
When we arrived up she started talking to me as if I was an Open water diver with 10 total dives and when I said that we didn’t go according to the plan she briefed, she said we don’t need to follow the brief if we see something...then the plan changes.
So I think I said enough for those of you who are used to well organised, experienced and knowledgeable cruises and directors. She was incredibly nervous and insecure as this was the first time she did the trip. She did the good old method of trying to get the rest of the group on her side and after every situation they spoke about it in French.
Surely as a company you don’t send someone completely new (not only to the site but also as an instructor) on a 6 day liveaboard with no local knowledge. The dives were not easy dives. Lots of currents and you needed to be able to adapt to the tide/current situation as a cruise director when choosing a dive site.
The staff however was wonderful and they cooked us the best meals. If you are looking for a sailboat experience with 2 dives/day and don’t really care about the diving itself, go for it, otherwise stay away! Proper French arrogance and attitude all around. Local Malagasy people are not treated with respect by them either and they really tried their best to make me feel included despite the language barrier.
Aliz Radek-Mills, UK, 20 January 2020

Speak and teach in French, English, Italian, French, Spanish and German. Run by Michele and Jennifer. Organise day trips, introductory dives, and training courses PADI from Open Water Diver to Divemaster and CMAS from 1* to 3*. Also organize cruises to the Mitsio and Radama Archipelagoes on catamarans. Open througout the year.

The only dive center in Madagascar to offer Fluo night diving. Also a macro specialist.

"Aviavy Hotel was at the beach where the daily dives leave. Rooms are comfortable with A/C, reasonable prices and very good food if too tired to wonder elsewhere."
Mari Seppä, Finland, 22 September 2014

Please send us your comments on Madagascar. Do you want to recommend a diving centre or dive site? Let us know. If you own a dive centre get yourself added.

If you want to be notified of updates to the site, along with diving news and discussion, please subscribe to our newsletter.

We also welcome your views and experiences - send us your trip reports.