Creatures of the Month 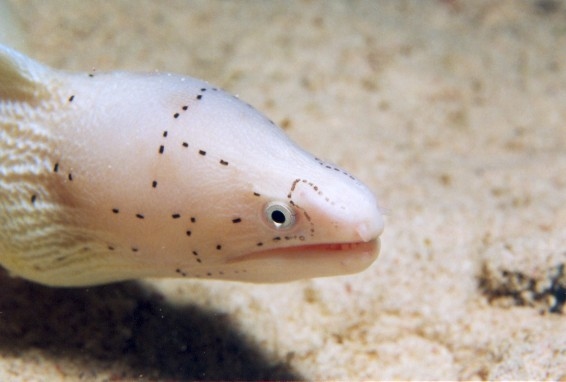 The Geometric moray has a long body with one continuous fin along its back. Like other morays it has elongated nostrils. You can easily recognise it by the dashed lines patterning its face, as shown in our photo.

Morays live in holes and generally hunt by night, locating their prey by their excellent sense of smell. Moving with snake-like motions, they are extremely quick. When at rest you may see them rhythmically opening and closing their mouths. They do this to maintain a respiratory current past the gills.

The Geometric moray is the most common eel in the Red Sea. It is also found throughout the Western Indian Ocean: Madagascar, Mauritius, Oman, Mozambique, Seychelles, South Africa, etc.

Quite small for a moray, the Geometric moray reaches 65 cm long. It lives at depths down to 40 m on coral and rocky reefs. You may see groups of up to 10 young eels sheltering in rock crevices.

The black dashes on the face and body of this moray mark its pores. These are part of its lateral line system which detects changes in pressure and so can be used to detect movement and vibration in the surrounding water.

The Geometric moray, Siderea grisea is also known as the Grey Moray and Gymnothorax griseus.