13 September 2021
Most of the diving in Turkey is in the west and south of the country in the Mediterranean and Aegean seas. It also borders Black Sea and the inland Sea of Marmara. For wreck diving enthusiasts there are the wrecks at Gallipoli.

The main diving season starts in May and continues until November, although you can dive year round. Water temperatures range from around 16 oC in February to 20 oC in May & November and 28 oC in August. Visibility can reach 30 m. Dive sites include wrecks, reefs, walls and caverns.

Ten types of whale and dolphin are seen in Turkish waters, plus the rare Monk Seal. They are all protected by Turkish law.

The main diving areas are Kas, Fethiye, Kalkan and Northern Cyprus. For wreck enthusiasts, Gallipoli has now been opened up to divers.

The Fethiye area has some attractive diving: caverns, amphora, rocky reefs. The sea is often quite choppy but the visibility is generally good (around 20 m). 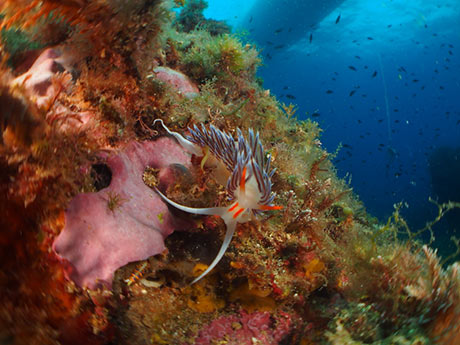 " This is mostly shore diving, also it is very nice place for snorkelling. There are 5 main spots mostly walls. There are not too many fish but water is so clear and visibility about 50 feet. I stayed at a camp site and I'd stay there again and again...Scuba cost 20 and 35 Euros (2004). accommodation is about 15 Euros included breakfast and dinner (mostly vegetarian). "

"Drop off to turquoise blue and lots of barracuda "
Mike Morris

This area comprises the wreckage of more than one wreck. It is called the Duchess of York after the ship's bell which was found. The main wreckage though is thought to be from the SS Sakarya.