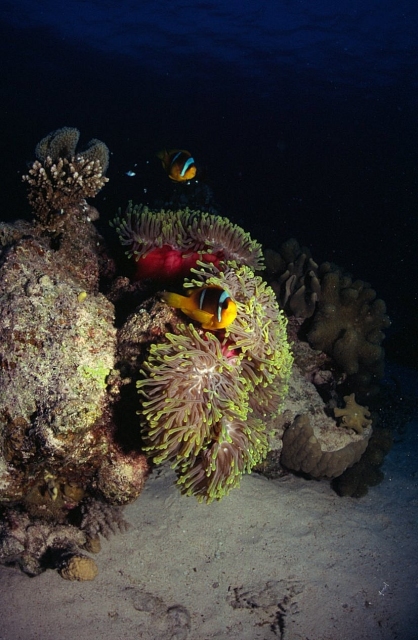 The most common clownfish in the Red Sea. It is found at depths of 1-30 m, generally living in pairs in association with an anemone. This is a classic example of symbiosis. The tentacles of the anemone protect the clownfish from predators. At first contact with the anenome the clownfish jerks back, but gradually its mucus coating gives it immunity to the anemone's stinging nematocysts. The benefit to the anemone is probably down to the fish's swimming within its tentacles and wafting them around, thus increasing the water flow and hence the amount of oxygen available to the anemone. The anemone may also feed on the fish's waste material.

There are many different species of clownfish: some fish live with only one species of anemone whilst others show no specific preference. Some live in anemones as juveniles and move to coral as adults. Some never move from their anemones; some will dart up to 6 feet out and "attack" yellow depth gauges or mouthpieces. Eggs are laid at the base of the anemone, and the parent often rubs the anemone causing the tentacle to extend, which in turn forms a protective canopy for the eggs of the fish.

When clownfish have been artificially deprived of their anemone, they often dig holes and feed them, defend them and sleep in them much as they would behave with an anemone. Clownfish in an acquarium have been observed bathing in the air bubbles and defending them, perhaps seeking stimulation comparable to that of the tentacles of the anemone.

More pictures of clownfish are in the Clownfish Room of our photo gallery.